Tour Confidential: What stood out most on Day 1 of the U.S. Open? 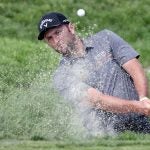 Jon Rahm hits out of a bunker on Thursday on the 11th hole at Torrey Pines.

Day one of the U.S. Open at Torrey Pines is in the books. (Round one, meanwhile, will continue Friday morning after fog delayed play in the morning.) A few unexpected names are at the top of the leaderboard — Russell Henley and Louis Oosthuizen lead at four under, while Francesco Molinari and Rafa Cabrera Bello are a stroke back. But the expected names are lurking — Jon Rahm, Brooks Koepka, Xander Schauffele and Hideki Matsuyama are among those at two under. What, to you, stands out most about Thursday at the Open?

Sean Zak, senior editor (@sean_zak): Jon Rahm stands out to me. The actual favorite whom everyone agreed upon entering the week. He looked comfortable teeing off in the afternoon with a four-shot deficit. He made this look like Torrey Pines in January, of which it certainly is not. He is going to have an early tee time Friday morning and might be your clubhouse leader around 3 p.m. ET.

Josh Sens, senior writer (@JoshSens): It was a fun first day, but also a reminder of how much influence design has on the competition itself. In the punishments you face for errant shots. In the creativity required to recover. The fairway bunkers are relatively shallow and not much of an impediment for players of this level. Which side you miss the green seems to matter less than it does at some other U.S. Open venues. It’s probably not fair to compare Torrey to, say, Winged Foot or Pebble, and it still promises to be a riveting week, but there’s simply not as much disaster waiting, or as much strategy required, as there usually is in this event.

Nick Piastowski, senior editor (@nickpia): That Brooks Koepka is going to win by three. No matter how many times we talk and write about it, it still stuns that he is at the top of major leaderboards. Bad knee? Doesn’t matter. Missed cut last week? Doesn’t matter. He’ll be holding his fifth major championship trophy on Sunday night. (A special mention here to Matthew Wolff. It’s great to see the phenomenal talent back and doing what he does best again after a two-month break.)

Alan Bastable, executive editor (@alan_bastable): The lushness and relative receptiveness (Russell Henley’s word) of the course surprised me. Those conditions paired with 21 players finishing the day under par had me at times forgetting this was the U.S. Open and not the Farmers. No doubt that will change over the next three days, and it needs to. More brown on the greens, please, and less, um, green. Also … made-for-the-majors Webb Simpson shooting 79?! Didn’t see that coming.

Dylan Dethier, senior writer (@dylan_dethier): The evening at Torrey Pines was … weird. The marine layer rolled in, the temperature dropped and suddenly almost every spectator left. I was following the group of Rory McIlroy, Dustin Johnson and Justin Rose, who hustled home and even had Rose run ahead to tee off on 18 before the horn blew for darkness. (He was seven over at the time and happy to oblige.) Finishing in a hurry on an empty golf course in the fog? It didn’t really feel like the U.S. Open. But by Sunday I’m guessing it will.