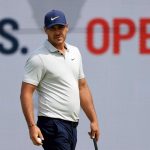 Brooks Koepka opened with a round of two-under 69 at Torrey Pines on Thursday.

SAN DIEGO, Calif. — The saying goes that when someone shows you who they are, you should believe them the first time.

What about the eighth?

Brooks Koepka is a major championship golfer. These are the only tournaments he cares about. Koepka has told us this for years. He’s shown us, too. Again and again and again. Of course, that wouldn’t matter if he didn’t have the game to back it up. But fortunately for Koepka, he has the ability to actually play his best when he cares the most. That’s a good way to live.

So do yourself a favor: Stop doubting Brooks Koepka at major championships. Seriously, stop it. That sort of behavior is bad for your health. If you’re a bettor, it’s bad for your investments. You might as well wager against gravity. Brooks Koepka is inevitable. He will be drinking Michelob Ultras on your television screen and, when the commercial break ends, he will be making par putts near the top of your U.S. Open leaderboard.

This week’s “expert” case against Koepka went something this: He missed the cut last week in South Carolina. He’s missed the cut in three of his last four tournaments, for that matter. He doesn’t like putting on poa annua greens and he hasn’t played much at Torrey Pines and in a video it looked like his knee hurt and, most of all, you can’t just suddenly turn it on one week. He was due for a major championship regression.

Rubbish. Statistical analyses of Koepka’s game have a hard time factoring in the apathy with which Koepka treats the rest of his golf and the way for him, trying harder seems to actually help. Golf famously doesn’t always work that way.

“Sometimes I just get lackadaisical out there,” he said of last week’s Palmetto Championship. “It’s something I’ve got to work on in regular events.”

In other words, the majors-only thing is hardly a point of pride. But it is a reality. Koepka has finished either first or second in seven of his last 14 major starts, including T2 at Kiawah last month. That was an encouraging but disappointing result, which says something about Koepka’s expectations.

What did we expect from Koepka this week? Sportsbooks sent him off at 17-1 odds to win, nearly double that of Jon Rahm (10-1) and just behind Bryson DeChambeau (16-1). And while Koepka very well might not win, that number is what people in the biz might call value. In his last three U.S. Opens, after all, Koepka has lost to exactly one player. He won at Erin Hills in 2017. He won at Shinnecock Hills in 2018. He finished second at Pebble Beach in 2019.

On Thursday, Koepka started on the 10th hole. He birdied 12, 17, and 18 to jump into a share of the lead. He made the turn and birdied No. 2 to take the lead alone. And while he leaked two bogeys down the stretch, he held on just fine, posting an opening 2-under 69 to sit T4.

Reporters often try to delve inside Koepka’s mind after rounds like this. Everyone in golf tries to peak for a major. Why can only Koepka seem to pull it off? He swats away any complex analyses; those are ancillary details, of no use to him. After his round, Koepka was asked which played a bigger factor: the fans or the wind. He scoffed at the premise.

“The wind,” he said. “I mean, the wind affects the ball, the fans don’t affect it.” Then he shrugged. “But it’s nice to have them out.”

Let’s hear a little more from Koepka. How does he approach things during a week like this?

“I know what I’m doing and I don’t try to do anything I can’t,” he said post-round. “It’s just all about discipline in a U.S. Open.”

Trust that Koepka will continue to play well. Adopt his approach to majors and apply it to your U.S. Open pool at home. Quiet your mind. Use discipline. Forget about the leaked interviews and the missed cuts and the balky knee. Open up Koepka’s Wikipedia page, if it helps. Better yet, I’ll write it out for you. Here’s how Koepka has played in his last 14 major championship starts:

“It’s pretty simple,” he said. “It’s a lot simpler than what guys make it. I think a lot of guys make it more difficult than it needs to be.” That part could be about you, predicting Koepka to falter. This next part is more helpful in understanding the on-course strategic element. “You’ve just got to understand where the flag is, what you’re doing and where to miss it.”

There’s no figurative language there. Why bother? Koepka is here to win a golf tournament. He’s off to a heck of a start. On Thursday drove the ball pretty well and he hit his irons pretty well and he was fantastic with the putter. By midday he’d emerged, finally, as the betting favorite.

Life is generally filled with horrifying uncertainty, so consider this a blessing. A pillar of truth. The sun sets over the Pacific Ocean. Brooks Koepka contends at major championships. Doubt him at your peril.