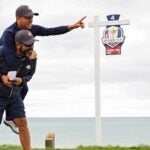 Justin Thomas rides the back of Michael Greller, the caddie of his Friday morning partner, Jordan Spieth.

Check in each day of this week’s Ryder Cup for the unfiltered opinions of our writers and editors as they break down the hottest topic in the event, and join the conversation by tweeting us at @golf_com.

The Ryder Cup, after a long, three-year wait, is finally here. And on Thursday, we got our matchups for Friday morning foursomes. First off are Jordan Spieth and Justin Thomas for the Americans, against the Spanish duo of Jon Rahm and Sergio Garcia for the Europeans. The second match pits Dustin Johnson and Collin Morikawa for the U.S. against Paul Casey and Viktor Hovland from Europe. In match three, Americans Brooks Koepka and Daniel Berger meet Europe’s Lee Westwood and Matthew Fitzpatrick. And finally in the fourth match, Patrick Cantlay and Xander Schauffele of the United States face Rory McIlroy and Ian Poulter of Europe. Two questions! Were there any surprises among the pairings? And which one are you looking forward to the most?

Sean Zak, senior editor (@sean_zak): Not surprised by anything, frankly. Bryson sitting foursomes is understandable. Europe trotting out veterans with younger players in the alternate shot (and potentially just for that session) is understandable. Tommy Fleetwood is the most in-form Euro not to play … so if Westwood and Fitzpatrick get spanked, that’s one team you could second-guess. But we’ve got four very intriguing matches regardless. Everyone will be following the first match, but the fourth is the really good one. Team Poulter/McIlroy can be savages in alternate shot, but they’re playing against the most in-form American team. That’s a doozy!

Dylan Dethier, senior writer (@dylan_dethier): I was mildly surprised to see Westwood and Fitzpatrick out in the first session, but even that makes sense — they’re better suited to alternate shot than the demanding birdie-fest of afternoon fourball. These are eminently sensible pairings. They’ll be delightful to watch. The first and fourth matches are appointment viewing. Let’s get this thing going!

Alan Bastable, executive editor (@alan_bastable): That first match — JT/Spieth vs. Rahm/Sergio — is an absolute barn burner. Not hard to imagine those four ending the week with 15 points among them. No point is any more important than any other point, of course, but a full point from either side in that match would be a big emotional lift for the other 10 players on their side. None of the pairings jump out at me as surprises, but I am perplexed by why Stricker chose to open with alt-shot, which historically has not been a good format for the Yanks. Asked about the decision Thursday evening, he said, “Stats have shown over the years that that’s a better format for us. Yeah, so we wanted to kind of stay with that plan and that’s what we’re doing.” Odd.

Luke Kerr-Dineen, Game Improvement Editor (@lukekerrdineen): Was a bit surprised to see Westwood and Fitzpatrick go out in the third spot, but the more I think about it, the more it makes sense: Fitzpatrick has a safe game for alternate shot, and both players almost certainly won’t play on Friday afternoon. Fleetwood sitting will raise a few eyebrows, but rumblings from the European team room suggest Rahm might be the only player to play all five matches — and that’s if he plays well. All of which is to say, everybody will have to sit at some point. As for the match I’m most looking forward to? DJ and Morikawa vs. Casey and Hovland. The latter pairing is straight out of the ‘How Europeans win Ryder Cups’ playbook: A trusted hand who knows the drill, whose job is to show the ropes to a talented upstart rookie. DJ and Morikawa, for their part, have had some lingering questions about their form coming in. Each player in that group has the potential to be a major factor for their respective teams — for better or for worse — and it’ll make the match itself a fantastic bellwether for how the contest will play out.

Nick Piastowski, senior editor (@nickpia): I’m mildly surprised that Tommy Fleetwood, after a dominant run in Paris, is sitting to start, and I’m a little disappointed that Bryson won’t try to pump it out there 400-plus on the opening tee shot. But there are solid matchups up and down the board. The one I’m looking forward to the most is the last one. The cool duo of Xander Schauffele and Patrick Cantlay meets the fiery one of Ian Poulter and Rory McIlroy. Love it!

James Colgan, assistant editor (@jamescolgan26): The pairings were about what we expected, but I was a bit surprised by the cadence. Xander/Cantlay as Stricker’s “anchor” pairing could be dangerous for the Americans. Both are playing lights-out right now, but can’t help but wonder if you’d rather get your rookies (particularly only the pair of first-timers playing tomorrow) out earlier.

Jessica Marksbury, multimedia editor (@jess_marksbury): I’m a little surprised by the fact that, looking at the matchups, an American AM sweep seems feasible! Maybe I’m feeling a little rah-rah for the red, white and blue, but hear me out: The toughest match will for sure be the opener, with Rahm and Garcia likely to put up a really good fight. But my money’s on JT and Spieth to grind that one out. Then, DJ/Morikawa, Koepka/Berger and Cantlay/Schauffele? On paper, no European opponent seems up to snuff for those duos. LET’S GO. I’m loving Team USA’s prospects on Friday morning.

Josh Sens, senior writer (@JoshSens): Nothing shocking in the pairings, though there were earlier signs that Hovland and McIlroy might go out together. I actually think Harrington’s decision makes more sense, as Rory has clearly gotten a thrill out of Poulter’s exploits in the past and the two are likely to feed nicely off each other. As for the match I’m most looking forward to? Bastable’s right. That first one stands to be a barn burner, but really, how can you not be pumped about them all.