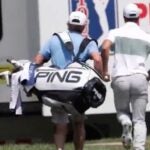 Viktor Hovland, behind the 1st tee at Caves Valley on Friday, walked over to playing partners Brooks Koepka and Xander Schauffele and their caddies and asked in their general direction: “You guys got to be sweating, huh?”

If they couldn’t tell as he was tucking in his shirt.

Of course, you would be too if:

— It were 100 degrees, which it was in the Baltimore area;

— You and your caddie were standing on the 10th tee ahead of your second round at the BMW Championship;

— You and your caddie were standing on the 10th tee ahead of your second round of the BMW Championship all by your lonesome, outside of one member of the PGA Tour social media team.

And there Hovland and caddie Shay Knight were. And there they went, running. They were teeing off of the front nine, not the back. Should they be five minutes late or less to their 1:14 p.m. tee time, a two-stroke penalty would be incurred, according to Rule 5.3 of the Rules of Golf. If they were more than five minutes late, Hovland would be DQ’d.

The reason for the mix-up? While Hovland was not interviewed by reporters afterward, Golf Channel’s Notah Begay, himself a former player, theorized this: On Thursday, Hovland’s grouping teed off of 1, and most every other week, that means the grouping will start on 10 on Friday — except with a shorter field this week, all players start on 1, from Thursday through Sunday.

So Hovland, with a club in his right hand, and Knight ran off the 10th tee, ran around the PGA Tour’s Player Performance Center truck and ran to the 1st tee. The Twitter account, @HovlandTracker, mapped the jog below:

Once there, Hovland tucked his white shirt in, first-bumped players and caddies, then hit his tee shot 265 yards down the left side of the fairway.