What do those numbers mean on Team Europe’s bags? 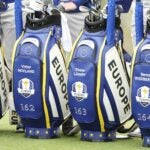 Each member of Team Europe has a number with special significance.

As the Ryder Cup gets set to kick off on Friday, you may have noticed a curious addition to Team Europe’s golf bags. Each player has a number on his bag and headcovers. But what does the number mean?

Turns out, the number has a pretty special significance. Each member of Team Europe has a number that corresponds to when they became a member of the Ryder Cup team. As European captain Padraig Harrington noted in his press conference earlier this week, there have only been 164 Europeans to ever compete in the Ryder Cup.

“We have a wall with the role of fame of who have played, and being able to look at those names and go through it, 164 is just startlingly small amount of players,” Harrington said. “Obviously you can blame Lee Westwood for that for playing 11 times, and Sergio, as well, but it’s a small group of people.

“When you think 580 people have gone to space and 5,870 people have climbed Mount Everest, it’s incredible that there’s so few who have played in the Ryder Cup,” Harrington continued. “It makes it very special for the players to know that they have a place in history that can never be taken away from them. They will always have a name on that wall.”

Being a member of a Ryder Cup team is an unquestionably notable achievement, but this year’s crop of golfers aren’t the first to recognize the specialness of what it means to suit up for Europe.

Back in 2017, the Lions Trust sought to bestow every player who had ever competed on the British and Irish Lions rugby team, a union team comprised of players selected from England, Ireland, Scotland and Wales, with a an official, ordered number on a unique embroidered cap. To date, there have been 855 numbered players.

“This has been done before in Europe,” Harrington said. “I think certainly the Lions were famous for starting it out, and it was obviously, when you’re looking for these teams, this is a theme that the European Tour came up with, and I was very comfortable and happy to buy into it and believe in it, and it’s really worked out very nicely.”

Harrington himself is Ryder Cupper No. 131, dating back to his debut in 1999. This year’s three European rookies — Viktor Hovland, Shane Lowry and Bernd Weisberger — comprise Nos. 162, 163 and 164. Team Europe’s most seasoned players, Lee Westwood and Sergio Garcia, are Nos. 118 and 120, respectively.

Rory McIlroy, No. 144, says he has a great appreciation of what it means to be a Ryder Cup player, thanks to Harrington’s incorporation of the numbers.

“[Harrington] played a video for us last night to put it into context,” McIlroy said on Tuesday. “225 have won a men’s major. When you sort of break it down like that it’s a pretty small group and it’s pretty cool.”

“I think that’s what brings us very close together,” McIlroy continued, “and that’s been one of our sort of big focus points this week is just being here is very special and being part of a European team. Very few people can call themselves a European Ryder Cup player.”