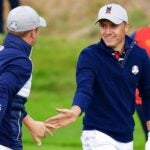 Jordan Spieth and Justin Thomas will team up for a second straight Ryder Cup.

After an extra year of waiting, months of predicting rosters, weeks of second-guessing captain’s picks and now several days of on-site press conferences and practice rounds, we finally have our Day 1 matchups for the 2021 Ryder Cup.

The first tee time is 8:05 a.m. ET, and the last of the morning session is 8:53 a.m. The high-powered matchup of Jordan Spieth and Justin Thomas vs. Jon Rahm and Sergio Garcia will lead it off.

“We talked occasionally about maybe who they are going to put out, but it doesn’t matter, really. They are all such great players,” Stricker said. “They are all highly ranked players and we know that we are going to have to play our best to beat them. So we have an idea that Rory and Rahm would probably go 1 and 4, and that’s pretty much all we knew, or really thought about. We didn’t know who their guys were going to be that they were going to be paired with, but we kind of had that figured out for the most part.”

While Stricker had his team practicing in pods that reflect Friday’s pairings, Harrington did the opposite, mixing up his practice groups all week. Why? Because he didn’t want his team to get bored.

“Honestly, I’ve had it in tournaments, you play three days with somebody, and then you’re playing with them the next five, four rounds of golf. That can be really tough,” he said. “I wanted everybody on my team to play with everybody in the team and not turn up on a week like this and by the end of the week go, I never saw a player; I never experienced that player and I never got to see what they were like in this situation. I was very keen on the players to mix with each other and get the full experience of the other 11 players in the team.”

The complete schedule for Friday morning is listed below. Friday afternoon fourball matchups will be announced late Friday morning. You can watch all of the action beginning at 8 a.m. ET on Golf Channel.

How to bet on the Ryder Cup

Looking to make a (legal!) wager yourself? We teamed with BetMGM, and the online sportsbook is offering a new promotion for the Ryder Cup: Bet $1 Win $100 if Any USA Golfer Wins Their Match! Sign up for an account to get into the action today.