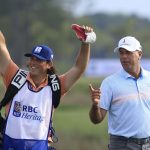 Stewart Cink, 47, won the RBC Heritage with his son Reagan on the bag.

It was supposed to be a short-term gig.

Stewart Cink had a caddie, after all — veteran looper Kip Henley — and his son Reagan was a busy young man. In the spring of 2020, he’d graduated from Georgia Tech. Over the summer, he got engaged. And he had a job lined up working in flight operations with Delta Airlines.

But first, Reagan wanted to spend a couple weeks on Tour with his dad. At 47 years of age, who knew how many more seasons Stewart would have on Tour? Reagan picked up a loop at the Safeway Open, his father’s first start of the PGA Tour season.

Then they won the event.

And on Sunday at the RBC Heritage, some dozen starts later, the father-son duo won again.

This time, it was Cink’s opening 36 that won him the event. He gapped the field and smashed tournament records with a 63-63 opening, then held on tight with a two-under 69 on Saturday and a one-under 70 on Sunday to win by four.

His lead was comfortable enough that the entire family could enjoy his stroll up No. 18.

“I did the job that I needed to do today to come away with a little bit of a cushion on the last few holes, which is such a pleasure to experience,” he said after the round. “It doesn’t happen to many people that many times in their career, but to walk down that fairway with a big lead and see that ball come up on dry land here on the 18th fringe with Reagan on the bag, and I knew [his other son] Connor and [his wife] Lisa were out there — it’s almost beyond words.”

The win cements a career resurgence for Cink. In addition to his win at the Safeway, the duo’s season includes four other top 20s, including a T4 at the Bermuda Championship and a T12 at last week’s Masters. Stewart joins Bryson DeChambeau as the only multiple winners this season on Tour. He becomes just the second golfer in the last 50 years to win twice in a single season at age 47 or older (Kenny Perry did so twice).

Sunday’s round amounted to something of a victory lap. Cink’s playing partner, Collin Morikawa, began the final round five shots back and birdied No. 1 but never got closer and shot one-over 72.

Emiliano Grillo went out in 33 to climb to solo second on the leaderboard; Harold Varner III closed with 66 to join him at T2.

But there was no catching Team Cink. Stewart played golf’s version of prevent defense on Sunday, making 15 pars, two birdies and just one bogey. It all added up to 19-under 265 and a four-shot win.

Stewart’s wife Lisa, an eager spectator all season long, was choked up after the round describing what the career resurgence has meant to the entire family.

“What’s so amazing is this kind of rebirth that Stewart is experiencing and at such an older age,” she said. “I’m just in awe of how well he’s playing at this time in his career, and it just seems like icing on the cake.”

The father-son caddie plan has an end date. Stewart and Reagan agreed that they’d keep playing together until the summer, when Reagan is scheduled to get married. After that, he’d return to his job at Delta. He’d take the next step in his own life.

But there are a few notable events on the golf schedule that might tempt him into continuing. The FedEx Cup Playoffs start in August, after all. Cink currently ranks No. 3 in those standings. He’s jumped inside the top 50 in the world. Even more improbably, he’s entered the American Ryder Cup conversation.

“It worked at Safeway, it worked here this week,” Cink said after his round. “I look forward to the rest of the year with him caddying. I might just retire when he stops caddying. How can I top this?”

We’ll see how flexible Delta is with time off.