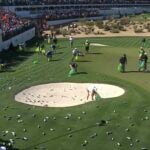 Carlos Ortiz made an ace at No. 16 at TPC Scottsdale.

Carlos Ortiz got his final round off to a hot start at the WM Phoenix Open. He began the day in 49th place, so he teed off No. 10, where he hit his approach shot to three feet. Birdie. At No. 11 he hit his approach to six feet. Another birdie. As far as back-to-backs go, that was pretty good.

Ortiz stepped into the loudest stadium in golf — No. 16 at TPC Scottsdale — and hit a perfect golf shot. The 16th was playing to 178 yards and Ortiz pulled 9-iron, landed it in the middle of the green and walked after it. The ball skipped forward and rolled towards the hole with impeccable speed. The roars built as the ball got closer and then fell into the side of the cup for a hole-in-one.

“There’s going to be a few thirsty people, because all the beer’s down on the hole now,” Trevor Immelman said on the broadcast as cups and cans flew in from the surrounding bleachers.

Before Saturday, there had been 2,864 tee shots at 16 since the last tournament ace, which Francesco Molinari made in 2015. But in the third round, Sam Ryder made one, sending the tens of thousands lining the hole into pandemonium. The Sunday crowd may have been mildly more subdued when Ortiz did it again, but you’d hardly have known it from watching.

The last time there were two aces on 16 in the same year? 1997, when Tiger Woods and Steve Stricker each made 1, according to the broadcast.

The ace was the third of Ortiz’s PGA Tour career, though no doubt his most memorable. He basked in the madness as tournament employees worked to clear the debris from around the green. Playing partner Kevin Kisner gazed out at the chaos with a grin on his face.

But then Ortiz’s round got even better. He stepped up to the drivable par-4 17th and ripped driver 336, leaving himself with a 13-footer for eagle. He buried it.

Two birdies in a row, then two eagles in a row — both in the first eight holes of his round? Not a bad start. Ortiz’s heroics sent him into the top 20 before he’d even made the turn.

Justin Ray reported that Ortiz was the first Tour pro to make back-to-back eagles without a par-5 involved since Tyrrell Hatton last season.

‘Have the balls to say I’m doing this for money:' Justin Thomas opens up on LIV