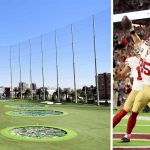 A free beer from a Topgolf game? Don't mind if we do.

There are few finer experiences in life than that of the free drink. It is a moment of instant bond between both giver and taker — a charitable contribution in which each party is the beneficiary.

Topgolf is a frequent setting for free drinks. Built into the arcade-style driving range is a restaurant and bar, which naturally lends itself to an element of competition. For those with a competitive edge who frequent Topgolf, a common wager for competition is the following round of drinks.

On Thursday night, a group of NFL stars gathered at Topgolf in Nashville, Tenn. True to form, the group played for free drinks, but with a twist: the winner of the competition won not only free drinks for himself, but for his entire fanbase.

The idea began as part of San Francisco 49ers tight end George Kittle’s “Tight End University,” a camp-like experience for the NFL’s best players at the position. Over the past week, more than 40 NFL tight ends have descended upon Nashville in order to participate in the camp and learn more about their position from the league’s best.

As with any good summer camp, Kittle and Co. worked hard to incorporate opportunities for bonding between the tight ends in attendance. The players are all staying in a hotel together, eating meals together, and participating in various on-and-off-field activities together.

The last of those activities came on Thursday evening, when the camp descended upon Topgolf for a friendly competition. But when they got on-site, players were alerted to a change in plans — the competition was about to get a whole lot less friendly.

As part of the outing, the players would each compete against one another in a long drive competition at Topgolf to determine a winner. Bud Light agreed to provide the winning player’s city with free beer.

On Monday afternoon, Kittle took to Twitter to announce the winner of the competition: Travis Kelce, a tight end for the Kansas City Chiefs.

“My guy @TKelce hit bombs at TEU and took home free @BudLight for all @Chiefs fans in Kansas City on National Tight Ends Day,” Kittle said. “That boy like that!”

Chiefs fans who wish to collect on their free beer can do so on National Tight End’s day on October 24th, and should be on the lookout for more information from Bud Light for how to cash in.