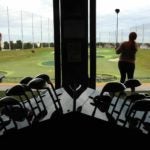 Golfers can now get closer to playing at Augusta National than ever before at Topgolf Augusta.

Forget praying you’ll be lucky enough to stroll down Magnolia Lane with a foursome waiting in the wings, there’s now a tee time available for everyone in Augusta, Ga. After a lengthy construction period, Topgolf Augusta has officially opened its doors some two miles from the Masters’ home.

The first-of-its-kind facility is only one story tall, a stark change from Topgolf’s traditional hulking, multiple story blueprints. While there are still 36 hitting bays at Topgolf Augusta, the design’s smaller footprint lowers the building’s profile and helps cut costs. But Topgolf aficionados needn’t fear, the facility still features all of the traditional amenities provided, including range games, restaurant service and Toptracer technology.

The venue was initially expected to open in time for the Masters in April, but construction changes brought about by the spread of COVID-19 forced the company to push back its opening date.

What Topgolf Augusta lacks in size it makes up for in amenities. Behind the range is a mini-golf course, fire pits and picnic-style seating — a campus built to provide customers with options in addition to the traditional Topgolf experience. (If you’re interested in seeing how it all looks, you can check out photos of the entire campus here.)

The company’s Augusta design is different from the small-footprint concept it is fiddling with opening in major cities across the United States. Those designs are expected to focus largely on dining and drinking and are unlikely to include a traditional driving range (opting instead for a series of multi-sport indoor simulators).

It remains to be seen how much cheaper the smaller-footprint Topgolf Augusta is from its siblings, which reportedly cost an average of $18 million to open. But irrespective of size, the franchise’s newest location gives golfers something they’ve been craving for years: a tee time in Augusta.