Bryson DeChambeau went to Topgolf. Yes, of course the results were spectacular 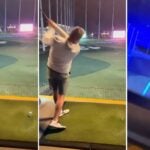 Bombs away: Bryson DeChambeau during a recent Topgolf visit.

Picture this: You’re banging balls at your local Topgolf, crushing some wings and nachos with your crew, when who should appear but missile-launching major-winner Bryson DeChambeau. What a world! It’s like John Legend showing up at your favorite karaoke bar, or J.K. Rowling making a cameo at your creative-writing class.

Here’s a video of his visit, which DeChambeau posted to his TikTok account last weekend:

@topgolf we might need to get taller nets🤪 #fyp #golf

This wasn’t DeChambeau’s first Topgolf trip. Here he is just a couple of months ago, mashing balls at another location with German long-drive specialist Martin Borgmeier.

What’s remarkable about DeChambeau’s latest visit, though, is his ball speed. DeChambeau regularly pushes north of 200 mph during his fabled training sessions and occasionally out on Tour, but casually wheeling back and delivering that kind of number with a beat-up Topgolf ball? Color us impressed. (We’re assuming Bryson didn’t bring his own balls, although he is swinging a Cobra driver.)

The result: a soaring drive that flew the netting at the back end of the range — in fact, as the ball exited the property, that’s where it appeared to hit its apex. If you’ve been to a Topgolf, you know how mighty a blast that is. DeChambeau captioned the video with: “We might need to get taller nets,” which called to the mind the net extensions organizers of the RBC Heritage installed at Harbour Town earlier this year to prevent bombers like DeChambeau and Rory McIlroy from airmailing the range.

Anyway, next time you see balls carrying the back net at your local Topgolf, peer down a few bays. The bombs may just be coming from an eight-time PGA Tour winner.