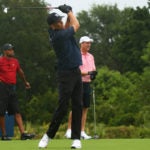 The Match II was a resounding success.

Wow, that was fun! Last week’s Seminole Skins Game was a lovely appetizer, and this turned out to be a weird, wonderful entree. Most importantly, raising $20 million for Covid-19 relief obviously made the entire thing an A+. What follows is much smaller-picture, but of course that’s the fun of it. It was live golf! Let’s review how this edition of The Match went down, one piece at a time.

GRADE: A+. Remember, the last time we were playing a PGA Tour event Tiger Woods wasn’t there. He was injured. Today, he wasn’t! Amanda Balionis asked how Woods was feeling as he warmed up on the range in the rain and he reminded her that his ’10’ (on a scale of 1-10) is lower than it used to be, but still — he looked plenty loose and limber on the holes that followed. An efficient, encouraging showing.

GRADE: A. JT was a revelation. He was effortlessly himself — insightful and confident. He added to the conversation but didn’t feel any need to fill empty space unnecessarily. Luke Donald put it well:

GRADE: A. Either Barkley got significantly better at this since November 2018 or else the product just got that much better. Either way, Barkley was funny and picked his spots so well — the balance was excellent.

GRADE: A+. Justin Thomas seems to enjoy occupying a “pesky little brother” role — and somehow I mean that in a complimentary way. He’s tight with Tiger Woods and he’s tight with Michael Jordan and so it makes sense that he’d be tight with Barkley, too. The dynamic played out hilariously all day, especially this exchange:

GRADE: C-. Things started slow. Like, SLOW. The 45-minute delay was a rough start, and then the first three holes took the better part of an hour. It was entertaining, but two hours in there was a sense of ‘Wait — they’ve only played six holes?’ Things picked up, and it’s important to note that I had literally nowhere else to be, but we’re nitpicking here.

Made in partnership with GOLF.com, this 3-pack of masks features new designs for golf enthusiasts. Proceeds go to the Golf Emergency Relief Fund, providing short-term financial assistance to those facing hardship due to COVID-19.
Buy Now

GRADE: B+. This was mostly fantastic. The front nine allowed us to see each guy play his own ball (for better and for worse) and just as that was running out of steam, we switched to the more-dramatic alternate shot format. That allowed for strategy and extra intrigue down the stretch.

My only format gripe would be this: Neither Manning nor Brady got nearly enough strokes on the front nine. Three each?! Brady could have gotten a stroke per hole and still hardly been a factor. The QBs were mostly window dressing until the turn.

GRADE: A-. Manning’s game WAY exceeded expectations. He stuffed it on three of the par-3s, kept it (mostly) in play and nearly holed out on No. 16, with the opponent looming.

GRADE: D? The question mark is because this was impossible to grade. Brady was an absolute trainwreck for six-and-a-half holes. He was getting roasted all over social media, and with good reason. Everyone knows the feeling of being the worst player in a group and being painfully, acutely aware of your every miscue. But golf has a funny way of flipping around all at once, and Brady went from hopeless disaster to hitting the most memorable shot of the day:

GRADE: A. This dynamic was WAY better than I thought it would be. Carts seemed lame on the surface — walking is undeniably cooler. But the cart rides helped with pacing, big-time. They also allowed for in-cart interviews, call-ins and strange shots of Mickelson bumping along like he was navigating Koopa Troopa Beach in Mario Kart. Exceeded expectations.

GRADE: A. This was the biggest upset of all. The witty banter is always bad. Even last week, when I felt like it was better than usual, it was still bad. But in the Match, it was a revelation. It quickly became clear that Mickelson and Manning were going to carry the day from a personality perspective, while Brady brooded and Woods grinded. It became clear that there were no sacred cows, not even Mickelson’s missing U.S. Open medal or Brady’s relationship with former coach Bill Belichick. The broadcast was much better because of it, especially as Brady came out of his shell on the back nine.

GRADE: ?!? What on earth happened on No. 16? First Russell Wilson appeared on screen offering 100,000 meals for any player that could hit it inside 12 feet. Then Brady stuffed his to 5 feet. Mickelson hit his to 5 feet, too. Then Manning hit it much closer. Wilson was out 300,000 meals and the best player in the group hadn’t even put his tee in the ground! I have no idea where that came from, but consider that Woods was the odds-on favorite to end up closest to the hole — and instead ended up farthest from the hole, by far.

GRADE: B-. These were mostly cool, I think? A few of ’em felt like Turner flexing how many NFL players they had on speed dial, but Koepka calling in to razz Brady was fun and when compared with last week’s call-ins, there’s no question this was an upgrade.

GRADE: A. There are sort of ways to measure this by score — Woods made two or three birdies on the front nine, depending how you count ’em. But this grade comes much more based on the impression of watching Woods. He was remarkably in control of his swing and his game. He was hitting the ball nice and low; he was flighting it off the tee, managing distance control with his irons and never getting out of position. All systems go.

GRADE: C-. Everyone was having so much fun that nobody seemed to mind, but the star of the show sort of disappeared. There’s a legitimate possibility that Woods’ microphone stopped working coming down the stretch; that’s a sign of how much we heard from the headliner even as he and his partner closed out the match. Mic problems or not, Woods seemed perfectly content to keep striping it and leave the entertaining to the rest of the crew. That’s fundamentally interesting.

GRADE: A-. He started slow but it didn’t take Mickelson much time at all to get into his element — and then he was fantastic. That putter was impressive, too.

GRADE: B. Medalist was — fine? There are extenuating circumstances here, namely inches and inches of rain plus limited resources when it came to cameras. But I don’t think we saw Medalist at its finest. It felt like a cool version of Florida golf, but without the spectacular aerials from last week at Seminole. Medalist is a very nice, very difficult golf course, and it was fun seeing Tiger Woods at his home club, but I didn’t really get an itch to play there. I’d still love to see it again minus the saturation.

GRADE: F. Ultimately, these guys had one job and couldn’t get it done.

GRADE: A-. The weather was awesome. If we’re going weird with these matches now — which we should — let’s go extra weird. Watching four world-class athletes without caddies warm up in an absolute downpour was well worth the price of admission.

GRADE: D. Nice lag putt by Tiger, for sure. Lengthy downhiller in the dark? That was huge. But the fellas never quite settled on how close they were going to get on high-fives, or fist-bumps, or interviews, or anything else. It was so awesome and then ended with such a fizzle. But we can’t end this column the same way, so…

GRADE: A+. Tiger Woods is the biggest draw in golf. Phil Mickelson is the best entertainer in golf. Tom Brady is the greatest football player in history and an insane competitor. Peyton Manning is a clutch golfer with a hilarious deadpan camera presence. There was a risk that this foursome would be goofy. Instead it was brilliant. Top marks to all involved! I’m sad we’re not doing the same thing next week.