Why searching for — and finding! — the perfect driver is one of golf’s great joys 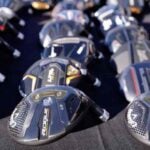 Driver options seem endless — but finding "the one" is truly special.

Could a golfer see this headline and not keep reading?

Gained 23 yards of distance off the tee — all without even changing my swing. Here’s how.

It appeared on GOLF.com on December 7, 2021, over a short piece by my slender colleague Zephyr Melton. Z drives it in play but a Walmart parking lot behind our colleague James Colgan, who is the size of a heavyweight Olympic rower. Or he did. Then came Zephyr’s extra 23.

He gained his new distance the new way. He bought it. He retired his college-era (Texas), out-of-the-bin R1 TaylorMade with a stiff but possibly tired shaft. In went a PING G425 Max with a shaft stiff enough for a Tour player. Hello 275.

Poor Zephyr. He may not know it, but he’s in the arms race now. He’ll be looking for another 23 from his next driver. Before long, Bryson DeChambeau will be interviewing him.

I’m going the other way. I’m putting song lyrics in my gratitude journal — just be thankful for what you got — and looking to pare down. I dream of hosting a yard sale with the requisite odd seashells, many putters — and a truckload of drivers.

Yes, we all have an ever-growing collection of putters. But the fact is, if you look at Arnold Palmer’s old workshop or my basement or your attic or the back of a mini-tour’s sleeper van, you’re bound to find more drivers than anything else.

In high school, I had a laminated Wilson Staff driver with a deep beige face and a red insert secured by four brass screws. You may know the phrase I hit it on the screws. It was a good thing.

I could slice that driver with the best of ’em, in part because the shaft was too stiff for me, but I didn’t have the money to just swap the club out. Also, that Wilson was good-looking in a time when driver aesthetics mattered. Your driver could raise your status. The preferred pronoun for all drivers was she. She’s a beauty.

I don’t recall where I came up with the heavy scratch needed for the next one (likely by selling Encyclopedia Britannica for a man named Ed in a brown suit), but this club was a 10: a persimmon MacGregor Eye-o-Matic, the color of coffee with cream, stamped with the words oil hardened. But the neck cracked, and now the wooden head of that Eye-oMatic sits on my desk. Here’s to old times.

After the MacGregor, I spent years in the woods, literally and otherwise. I went through one driver after another. Yonex, late in the Reagan years, made an all-graphite driver, jet black from head to toe, called the A.D.X. 200. We had a good thing going, for a while. Then we peaked around Labor Day — when all doomed romances peak — and soon after we were done.

Some years later, I bought a bespoke driver, one made to my exact specs. Loft, shaft length and flex, grip size, swing weight, dead weight and all the rest. I even had my initials stamped on it. (How pretentious can a bogey golfer be?) That driver was out after three rounds.

My close, personal friend Davis M. Love III gave me one of his backups, a graphite, pear-shaped Titleist 975D with a tree-trunk shaft and 6.5 degrees of loft. I showed it one day to Jesper Parnevik, at the West Palm Beach airport.

“Good luck with that,” Parnevik said. He knew.

Venturi used to say that driver is the easiest club to hit. The rule book gives you a tee.

Now his driver sits in my office.

Which gets us to the main event.

A half decade ago, I was on the tee of a notorious par 3, so long our looper was fore-caddying. He had the club I needed, driver. My partner, Fred4, said, “Use mine.” I logged more rounds with his late father, Fred3, than anybody else. The club was a TaylorMade M2. I fetched the green in one.

The M2 and I have been together ever since. I like the club, and I’ve been semi-successful, trying ever since to replicate the feel of that swing. For whatever it’s worth, here’s the main idea: What we call driver our forebears called play club. Venturi used to say that driver is the easiest club to hit. The rule book gives you a tee, and all you have to do is put the ball in play. A drive doesn’t need to be perfect. Even on a par 3.

Last year, another friend, seeing how hopelessly behind I was in my driver tech, sent me an extravagant gift: the biggest, baddest Callaway driver there is, with the longest shaft federal law allows.

I gave it a workout. It flew slightly longer than the M2. Also wronger. It was not for me. I can’t bring the Callaway to the yard sale. Selling a gift — that’s just wrong. But I could, of course, give it — regift it — to a golfing friend who is on the prowl.

I know that feeling, of always looking for an upgrade. But I also know the joy of being in a committed relationship with a driver you understand and trust.

For most everybody else — for all you Zephyrs out there looking for 23 more — this one’s for you.

Check out our reviews of the latest new drivers here.

Shop our selection of the latest clubs and more