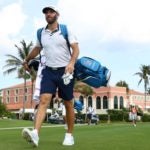 Dustin Johnson was off to the races on Sunday.

Let me start by saying that we will be grading this week’s test on a curve due to extenuating circumstances. Live golf is back! It’s terrific! If that sounds like what the kids are calling a “participation trophy,” remember that this match raised many millions of dollars and provided a slight change in the monotony of your Sunday afternoon couch routine. What more could you ask for? (Wait — don’t answer that. We can tackle it together.)

Without further ado, a selection of grades for the afternoon’s activities at Seminole.

Grade: A+. Dustin Johnson did not play his very best golf on Sunday, but he did appear to play his very fastest golf. Despite the languid manner with which he speaks, D.J. is among the world’s fastest walkers and he certainly wastes no time over the ball. Throw in a general apathy plus the comforts of a skins game format? Light speed.

Grade: A. The guy made what, seven birdies? He was rolling the rock and carrying his partner around. He just didn’t quite carry him over the finish line. More on that later.

Grade: A. Carry bags rule. Pros carrying bags rules. Even though I’m sad we didn’t get any “I left my bag in the fairway, but topped my drive short of the forward tees” moments, this was still fun and relatable. Why do staff bags exist again?

Grade: A. If he’d missed that last green, this may have been an F. But he sure didn’t! A skins game is all about picking your spots, after all…

Grade: A-. Overall, extremely fun, cool and relatable. Can’t give it a straight up “A,” though, because saliva is basically international enemy No. 1 at the moment.

Grade: A-. Matthew Wolff won the long drive competitions on both Nos. 2 and 14 (Ahem — just like I promised he would in my prop bets column!) with a pair of scintillating smashes. They made the rest of his squirrelly tee shots look even worse by comparison.

Grade: B+. I was impressed that Tirico brought up Rory McIlroy’s less-than-flattering comments about the president to the president. Couldn’t have been easy. Slight demerits for the way Tirico changed the real essence of those remarks and for just how strange that entire interview sequence was, but still — he did his job.

Grade: B+. Overheated? Maybe. Professional? No doubt. Rules Guy Mark Russell did an excellent job as Puller of the Pins and did so with his trademark shirt, tie and slacks. No Puma shorts for this guy!

Grade: B. I think I’m supposed to feel like Wolff and Rickie going Mustache Bros was either the Best Vibe Ever or Worst Look Ever, but I can’t quite summon that sort of passion. This seems to be Slick Rick’s go-to look now anyway, and Wolff? He looked nice. Bit of a Baker Mayfield vibe. Well done.

Grade: B. The hype was always going to be tough to live up to, and given the circumstances they did an excellent job of showcasing the golf course for the first time. Awesome drone footage and flyovers for between-shot action. Plus, the Donald Ross greens were on solid display. But tons of rain took any of the firm-and-fast fire out of the place and the impossibility of a fully operational camera setup meant we were still left wanting more.

Grade: B. It was easy to see players drawn in by the normal rhythm of golf — sidling up alongside a teammate to mutter something while another player was putting, for instance. That sort of muscle memory is tough to overcome. There was an early Steve Sands interview with Johnson where he got a little close, too. In general, though, players and crew seemed cognizant of keeping their distance, which sent a good message to those at home. McIlroy’s finishing air-five, while lame, was a good message, too. Someday we’ll be back to awkward missed high-fives, don’t worry.

Grade: B-. Look, I think we can definitely agree that everyone busted their butts to get us four of the world’s best golfers playing Seminole on TV. But we can also agree that some of the golf shots were difficult to see and many were difficult to track. We’re not pointing fingers, I promise! We appreciate you. But these were tricky circumstances to say the least.

Grade: B-. While the sight of players in golf carts cruising back toward No. 17 tee was hardly Ride of the Valkyries from Apocalypse Now, the closest-to-the-pin format was certainly better than the bizarre practice-green showdown between Tiger and Phil last year in Vegas. There was a clear winner, for one thing, without playing the hole multiple times. And we saw the No. 1 player in the world facing real pressure. That was a satisfying finish.

Grade: D. If the closest thing to a zinger felt like a FedEx-sponsored segment of Tour Trash Talk, probably wasn’t great. These guys seem slightly too aware that they’re performing, when all we’d really want is for them to be themselves.

Grade: D. Golf without fans stinks by comparison. We don’t have to pretend otherwise! We can acknowledge its stinkiness even while we remain grateful for fan-free golf on TV.

Grade: D-. Bill Murray seems, objectively, like a great guy. But when it comes to his golf shtick — specifically an extended interview taking away from the live golf we’ve been thirsting for — it’s a rough combination. Look, we still love the guy. He’s just a bit overexposed is all.

Grade: F. It wasn’t quite a shank. But when you’re staring down a 120-yarder for the match, you’ve gotta do better than a thin block. Rickie Fowler carried his team all the way to extra time — but that was as far as he could go.