Closest to the Pin between Phil, Bryson came down to millimeters (and a measurement) 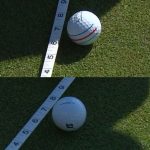 The Match 4, featuring two quarterbacks and two major-winners on a picturesque course in Montana, had plenty of watchability before any shots were even hit at Moonlight Basin. And once things got started, the shot-making was pretty darn good, too.

Look no further than the 5th hole, a 248-yard par-3 with a backstop that suited everyone’s ballflight. Tom Brady didn’t quite make it to the green, but Aaron Rodgers rolled his shot back to about six feet. That wasn’t nearly good enough for the closest to the pin challenge, though.

Phil Mickelson told Cheyenne Woods all about his approach and his intention to use the back slope. Mickelson was up first, riding two-straight birdies from him and his teammate, Brady. After puring his approach, Lefty was talking to his ball before it even apexed. “Kinda like that, Cheyenne,” he said. “That’s kind of what I was trying to articulate.”

He kept talking the entire time the ball moved. Up the hill, back down the slope, trickling out to about 2.5 feet. Thirty inches or so. Bryson was up next.

DeChambeau went with an 8-iron from nearly 250 yards away, playing the elevation and letting it soar. A full 8-iron, for sure.

“He kind of followed my lead,” Mickelson said after DeChambeau’s ball took off on the same line. “That’s not cool at all. I’m talking you through it, [Cheyenne], and he just copies it.”

DeChambeau’s shot did almost the exact same thing, trickling up the slope and back down toward the hole, to about 2.5 feet. Thirty inches or so. A shot so close that it required producers of The Match to jump into action and measure it out. The result, as you can see, was as close as ever.

The measurer started with Mickelson’s ball, then DeChambeau’s, then back to Mickelson’s again. Phil had nipped him by a quarter of an inch. Maybe even an eighth of a stroke, if you ask Mickelson, who gladly accepted the victory. It was worth $250,000 to Mickelson’s charity of choice, which is My Brother’s Keeper. DeChambeau’s similarly great shot doubled the total. And because everyone was feeling so charitable, both teams decided these tap-in birdie putts were Good-Good. No need to putt them out. We can certainly get behind that.