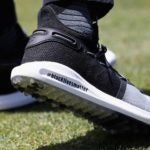 Two-time NBA MVP Steph Curry has been outspoken about race and social issues throughout his career. On Friday at a celebrity golf tournament, he once again used his platform to shine a light on an issue important to him and many Americans.

Curry is participating in the American Century Championship this week, an annual televised golf event that raises money for various charities. In the first round, Curry wore a custom pair of golf shoes honoring Breonna Taylor, the 26-year-old emergency room technician who was shot and killed by police in her Louisville apartment in March.

The shoes have Taylor’s name printed on the left toe, and feature Taylor’s face on the right toe above the words “Say Her Name.” They also feature the hashtag “#blacklivesmatter” in multiple places on the midsole.

When asked about the golf shoes in his post-round press conference, Curry explained his reason for wearing the shoes was “[to shine] a light on Breonna Taylor, demanding and praying and wishing for justice for her and her family.”

The shoes will ultimately support Black Lives Matter, as Curry revealed during his interview.

“Anytime you have an opportunity to be on a stage or a platform to raise awareness and to continue the conversation that’s going on in our country, I’m all for that, and we’ll send these to the Black Lives Matter organization and hopefully raise a lot of money for the amazing work that they’re doing.”

“We all have roles to play in terms of changing the racial climate in our country,” Curry continued. “And this is definitely more than just a moment that we’re feeling. And hopefully this is a very small gesture, but hopefully the money goes a long way. And hopefully they continue the conversation of what needs to change all the way around.”

Taylor was killed on March 13. According to the New York Times, shortly after midnight plainclothes police officers “executing a search warrant, used a battering ram to enter the apartment of Breonna Taylor, a 26-year-old African-American emergency room technician. Ms. Taylor and her boyfriend, Kenneth Walker, had been in bed, but got up when they heard a loud banging at the door. After a brief exchange, Mr. Walker fired his gun. The police also fired several shots, striking Ms. Taylor.”

Calls for justice in Taylor’s death were magnified when protests erupted nationwide following the police killing of George Floyd in Minneapolis on May 25. While the four officers involved in Floyd’s death are currently facing charges from ranging from second-degree murder to aiding and abetting second-degree manslaughter, none of the officers involved in Taylor’s death have faced criminal charges, though one of the officers was fired on June 23.