There is some unique gear in Lake Tahoe this weekend.

The American Century Championship is a vibrant golf exhibition where actors, sports figures and famous media personalities collect at the scenic Edgewood Tahoe Resort course in Lake Tahoe to compete and enjoy a weekend away from their usual gigs. The event is fun, but it’s also competitive; it turns out super successful people aren’t huge fans of losing. Who would have thought!

For myself, GOLF’s senior equipment editor, the 2021 American Century Championship was a place to see what equipment some of the world’s most famous celebrity golfers decide to put in their golf bags.

Below, we take a look at the gear setups of the celebrities you may be curious about, including Justin Timberlake, Charles Barkley, Stephen Curry, Jerry Rice, Vince Carter, Patrick Mahomes, Ray Allen and more. Let’s dive right in.

Curry, a two-time NBA league MVP and three-time NBA champion of the Golden State Warriors, is a scratch golfer, he’s competed on the Korn Ferry Tour, and he’s on staff with Callaway Golf.

In the Korbel Long Drive contest on Thursday, GOLF.com used a Foresight GCQuad launch monitor to measure Curry’s driver swing speed at 123 mph. Curry obviously brings some serious heat with his swing, and he uses a driver that’s made to knock down spin to keep the ball from ballooning too much and losing distance.

Interestingly, as Curry told GOLF.com, he was recently playing a round at Cypress Point Club with NFL superstar Tom Brady. During their round together, Brady tried out Curry’s driver and took such a liking to it that he asked Callaway to make him an exact replica of the driver. Brady ended up using the driver in “The Match 4” earlier this week as he played alongside Phil Mickelson, taking on the duo of Bryson DeChambeau and Aaron Rodgers.

Unfortunately for us normal folk, the “single diamond” prototype was never made available at retail, but chalk that up to the perks of being a legendary sports figure. Rice is often considered as one of the greatest wide receivers in NFL history, and he also had some of the most eye-catching sets of irons at the American Century Championship.

He bags the same flashy Nike VR Pro blade irons that Tiger Woods used in the early-to-mid 2010’s, except Rice’s are stamped with his old No. 80 jersey number he wore throughout his NFL career. Rice is an apt golfer in his own right, but it’s not a stretch to say he doesn’t have the same accuracy with his irons as Woods. While the irons aren’t necessarily the most forgiving options, Rice told GOLF.com that he enjoys the feedback and precision the irons offer.

“It gives me really good feedback if I’m making solid contact,” Rice told GOLF.com. “When I first started playing golf, I had blades. A lot of people don’t like to play blades, because they’re very difficult to hit, but I think I need that type of preciseness. It helps with my ball striking.”

If you’re looking to grab a fresh set of these for yourself, best of luck to you. Since Nike stopped making golf clubs in 2016, the company won’t be producing any more of these. They’re also highly sought after irons due to their positive reception among equipment fans, and Woods’ influence. Smartly, Rice bought up a bunch of sets years ago from anyone who had them. He told GOLF.com he currently has seven sets in reserve.

“What I did, once Nike stopped making clubs, I would just go around and ask people, ‘Do you have any Nike clubs?’ And I would buy ‘em off them,” Rice said.

Carter is a retired NBA legend who had a famously electric performance at the 2000 NBA All-Star Game Dunk Contest. He lit up the court with four unique dunks, including 1) a reverse windmill 360, 2) alley-oop, between the legs, 3) a jump from the free-throw line and 4) he put his arm in the rim. Each of the dunks is legendary in their own right, and a silhouette version of each was engraved on his ultra-custom Tad Moore putter.

Jonathan Wall, the Managing Editor for Equipment at GOLF.com, went deep on the backstory of the putter and what it means to Carter himself. Check out Wall’s article here for more on the awesome flatstick.

Allen is a retired NBA legend who’s played for several different teams, including the Milwaukee Bucks, Boston Celtics, Miami Heat, Seattle Supersonics, and the UConn Huskies. His ridiculously cool custom golf bag pays homage to all the teams he’s represented throughout his career.

As a founding member of Team Jordan, Allen is known to have some of the coolest PE (player exclusive) basketball sneakers in his shoe collection. So, of course he has a basketball sneaker as his putter cover, it would only be right.

Allen is known to have a deadly three-point shot on the basketball court, but did you know his career best golf round is a 61? Yeah, he doesn’t mess around when it comes to his golf game, and he’s around 40/1 odds to win the event, depending where you look.

A peak into his golf bag shows Allen plays a mixed set of irons, including TaylorMade P-7TW blade short irons, TaylorMade P770 long irons, and a Callaway X-Forged 18-degree driving iron. By mixing his set with irons of different designs, Allen can take advantage of the precision of blade irons in his shorter clubs, but also get increased speed and forgiveness in the longer irons.

Check out this article here to see if a mixed iron set is right for your game.

Timberlake — a superstar musician and a scratch golfer — was spotted by GOLF.com on the range on Wednesday before his practice round testing drivers. Hey, it’s never too late to get dialed in. Ultimately, he decided to keep his trusty TaylorMade SIM driver in the bag that he played previously.

Aside from the driver, Timberlake uses Miura’s all-new PI-401 irons, which are designed to be game-improvement irons that have a soft feel and muted sound. Filling out Timberlake’s bag are TaylorMade SIM and SIM2 fairway woods, Titleist Vokey SM8 Blue Slate wedges, and a new Royalty putter.

Note: Miura Golf is an affiliate company of GOLF.com. 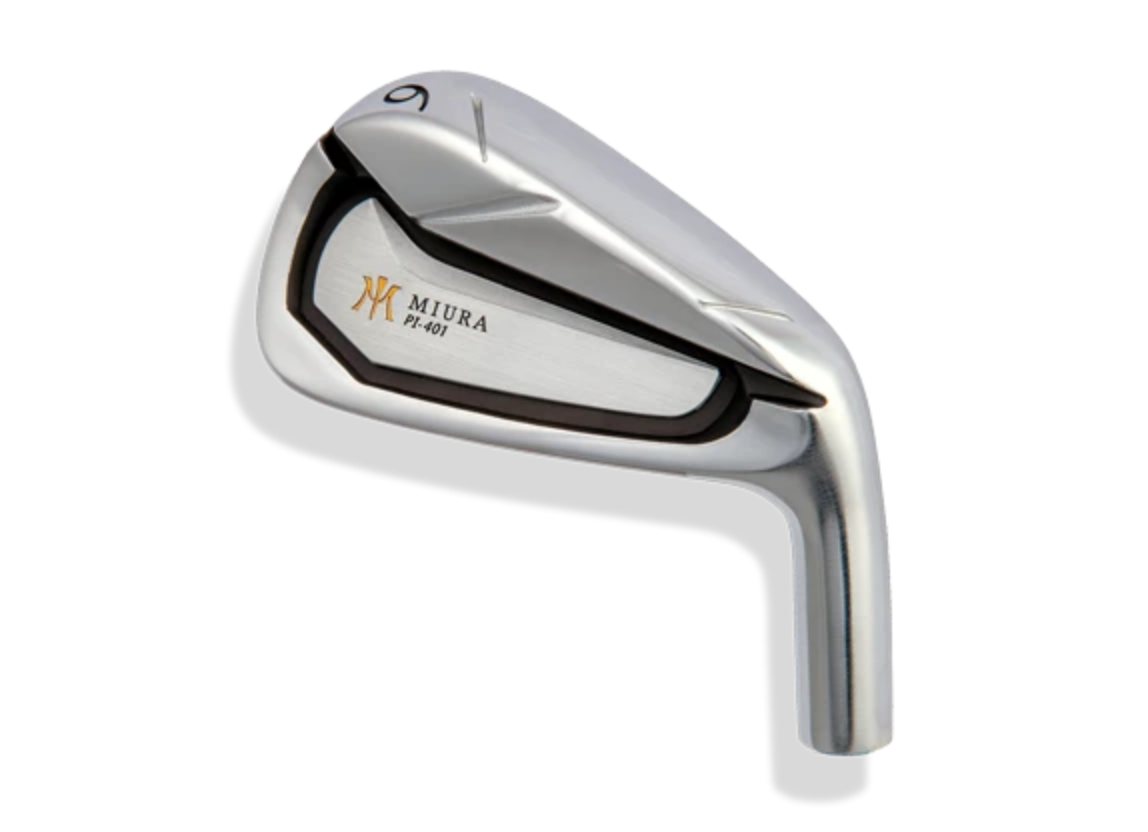 $2,640.00
The PI-401 cavity back iron was designed for players of every skill level. Shinei Miura sought to design an iron which delivered exceptional forgiveness, while maximizing distance. The PI-401 combines the renowned Miura “feel” with performance enhancing technology, enabling the golfer to get the most out of their game.
BUY NOW

Canelo is one of the most famous boxers on the planet and has won world championship belts in multiple different weight classes. He’s also completely golf-obsessed. After his practice round at the American Century Championship on Wednesday, he beat balls for hours on the range with his caddie-coach, grinding to improve his swing.

His custom golf bag shows just how much he loves the game:  “No Golf, No Life,” it reads on the outer pocket. Canelo also plays a blacked-out version of TaylorMade’s P790 irons, which are designed to help golfers achieve greater distance and launch. Unleash the beast when you play the TaylorMade 2019 P790 Irons. Designed to meet performance demands of better golfers and consistency of aspirational golfers, P790 Irons feature low-density SpeedFoam cavity filler to maximize COR and generate groundbreaking distance. A high-strength 4140 carbon steel face combines with Progressive ICT and cut-thru Speed Pocket technologies to lock in distance and control on impacts across the face. Low pro, le tungsten weighting delivers a lower CG and higher launch for unrivaled playability. Check out 150+ reviews from our gear experts in the ClubTest 2021 collection.
Buy Now

Romo, a former Dallas Cowboys NFL quarterback and current broadcaster, is the odds-on favorite to win the American Century Championship this week. He’s a competitive golfer who has played in Korn Ferry Tour and PGA Tour events, and he reportedly plays often with PGA Tour pros such as Will Zalatoris and Jordan Spieth.

Without an official club deal, Romo uses a mixed-bag setup with equipment from multiple brands. Below is a full look at Romo’s “What’s in the Bag?”

Putter: TaylorMade TP Collection Mullen (he told GOLF.com he found this putter in his father’s garage). On Thursday, GOLF.com measured his swing speed using a Foresight GCQuad launch monitor, and he swung his driver 110 mph! Not bad, Chuck, not bad at all.

Inside his golf bag, Barkley uses an all-PXG (Parson Xtreme Golf) setup, including the new Gen4 0311 XP irons, which are made for extra forgiveness and distance. With enormous hands, Barkley also opts to use JumboMax grips, which are the same grips that PGA Tour pro Bryson DeChambeau uses on his clubs.

Hawk, a former NFL linebacker, was a beast on the field, and apparently on the golf course, too. In the Korbel Long Drive contest on Thursday, GOLF.com measured his swing speed at a blazing 132 mph, and he carried the ball 326 yards.

While Hawk uses a modern Callaway Epic Speed driver off the tee, he uses an old-school persimmon driver as his fairway wood that he bought for $5 at a garage sale in Columbus, Ohio.

Seriously, he uses a $5 garage sale persimmon driver as his fairway wood! Check out the video below to hear Hawk speak on the throwback club.

Mahomes, entering his fifth year as an NFL quarterback for the Kansas City Chiefs, has already amassed an impressive playing resume, including a Super Bowl MVP and NFL league MVP. He also drops absolute BOMBS with the driver. At the American Century Championship’s Korbel Long Drive contest, Mahomes flew his drive 347 yards to win the event.

Tuck, a former NFL defensive end for the New York Giants, is an avid golfer, but he doesn’t prefer to hit driver much on the golf course. He typically opts for a 2-iron off the tee for safety, instead.

But, since there was a long drive contest going on, Tuck pulled out his PXG driver and took a fearless swing aiming for the fences. The problem was, he nearly missed the golf ball, clipped the toe edge of his driver, and sent the ball zooming right over the head of Mark Hannan (the Senior Producer at 8am Golf, and the producer of GOLF’s SubPar and Fully Equipped podcasts).

Check it out below. Try not to flinch:

Hannan was taking a knee on the side of the tee box — seemingly out of harms way — filming a slo-mo video of Tuck’s swing; Hannan is a big Giants fan, keep in mind. Seconds later, Tuck’s drive came off his club 43 degrees left of his target, and nearly hit Hannan in the forehead.

Don’t worry, Hannan is perfectly fine (albeit a bit shaken up), and Tuck even autographed the golf ball for him. Tuck may never live that shot down amongst his athlete buddies, but at least Hannan went home with an unforgettable story to tell.

Surely Tuck will stick to the 2-iron off the tee from now on. You know, for safety.