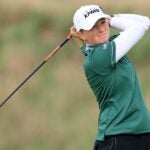 Stacy Lewis hits a shot during the pro-am of the Women's Scottish Open on Wednesday.

“It shouldn’t take that long to play,” Lewis said that night. “I knew it was going to; that’s the sad part, you know it’s going to take that long. I do think an effort needs to be made across the board to play faster, because obviously I wasn’t watching it on TV, but I’m sure it couldn’t have been fun to watch on TV. There’s just so much the announcers, that they can talk about to fill time.”

Now, one year later, Lewis is back. And of course that touchy slow-play subject was brought up once again when she spoke with the media on Wednesday. “Has the pace improved in the last 12 months?” she was asked.

“No, probably not,” Lewis said. “… But people are paying attention. Our officials have gotten on to people a little bit more. I know there’s been more fines and more penalties have been given out over the last year. Maybe it’s gotten a little bit better.”

Asked how she would fix slow play, Lewis said she’d like to see more spot-timing and penalty strokes, not just fines.

“They have implemented a policy this year where you can be timed when you’re not out of position if an official happens to be there, and if you’re over, it’s just a fine right now,” she said. “But I would like to see if an official is there and you take too long, you should get shots. I mean, I would honestly like to see that. Because I think as a tour, we need to make this game more enjoyable, make it more fun to watch. You know, it’s just I think with Covid and all that, we could potentially be losing people coming to tournaments, losing eyeballs watching us, and I would like to see us be on the forefront of making the game faster and making it more fun.”

Lewis said she played her Wednesday pro-am round with a member at nearby Crail, who told her their club policy is three hours for a round.

“That’s how the game should be played,” Lewis said “It’s enjoyable, you can take three or four hours out of your day and you can go do whatever else you need to do. Where now, you’re literally spending half of your day at the golf course, and not a lot of people have time for that.”

While it might not be completely noticeable to some, there has seemed to be more of a watchful eye on slow play over the past year, even in crucial moments.

At the KPMG Women’s PGA Championship in October 2020, Klara Spilkova received a two-stroke penalty for violating the slow-play policy and missed out on some cash. More recently, at the Bank of Hope LPGA Match Play in May, Carlota Ciganda birdied the 18th hole to seemingly beat Sarah Schmelzel 1 up, but after the match Ciganda was told she had been assessed a slow-play penalty on the 18th, which meant she lost the hole and the match.

“It is harsh, and it looks harsh to the media and everybody on the outside,” Lewis said. “But I do think we need that. Because you start playing with shots, that affects where you are on the leaderboard, affects how much money you’re making, it affects your status at the end of the year. That affect things a lot more than a $1,000 fine does ultimately. I’m okay with it and I’d like to see more of it.”

The Women’s Scottish Open is Thursday to Sunday at Dumbarnie Links in Fife, Scotland. Lewis is grouped with Minjee Lee and Atthaya Thitikul for the first two rounds.