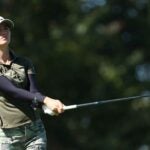 Slow play has long been a hot topic in the world of professional golf — especially recently when it comes to the women’s game. Former World No. 1 Stacy Lewis didn’t hold back when asked about the problem during August’s Scottish Open, even going so far as to call out her playing partners.

“I’ve been an advocate for changing our pace of play, getting people to play faster for a long time,” said Lewis, who eventually won the tournament. “It needs to change because we’re going — we’re going in the wrong direction.”

For many observers, penalties for slow play are seemingly too few and far between. But at this week’s KPMG Women’s PGA Championship, a slow-play penalty was actually assessed — and it cost the player dearly.

Twenty-five-year-old Klara Spilkova of the Czech Republic was given a two-stroke penalty for breaching the KPMG Women’s PGA Championship pace of play policy. Players are warned by officials that they are on the clock, and if a player fails to rectify the issue, a penalty is imposed. Spilkova’s penalty was assessed on the 15th hole, which changed her par (a 4) into a double-bogey 6.

Prior to incurring the penalty, Spilkova, who has one career win on the Ladies European Tour, was 1-over for the day and 5-over for the tournament, with the cutline holding steady at 6-over. The costly double bogey on 15 bumped Spilkova to 7-over with three holes to play. She was unable to get a shot back on her remaining holes and parred out, finishing at 7-over for the tournament — excruciatingly, one shot shy of making the weekend.