‘I’ve had people tell me I suck to my face:’ Spieth heard DeChambeau jeers 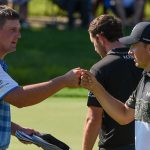 Bryson DeChambeau, left and Jordan Spieth after Friday's second round at the Memorial.

Jordan Spieth, during Thursday’s first round of the Memorial, walked to the left of Bryson DeChambeau as they marched to the next tee box at Muirfield Village. They weren’t alone. Ahead of them, in the video posted to the Zire Golf Instagram page, was a security officer. Around them were fans. And chirps.

“A lot. Yeah, quite a bit,” Spieth said when asked how many times he heard some play on Brooks Koepka’s first name on Friday.

Theoretically, it should have died down. GOLF’s James Colgan reported that at least three people were ejected from the tournament for shouting at DeChambeau, the latest chapter in the two-plus-year Brooks-Bryson beef. The feud was renewed two weeks ago after the release of a previously unseen video in which Koepka showed his disgust toward DeChambeau at the PGA Championship, and it took another turn recently when a video surfaced showing DeChambeau’s disgust toward a fan shouting “Brooksy” after a swing.

Which brings us to this week’s Memorial, DeChambeau’s first tournament since the release of the videos (Koepka is not playing this week). And at least a few fans smelled blood. Spieth, who played with DeChambeau over the first two rounds, and again in Saturday’s third, said Friday “he mentioned it to me at one point.”

“And I said, all anyone wants is a reaction and you give it to them, then you’re going to, it’s going to get worse,” Spieth said. “So it didn’t seem to bother him. I feel like — no, I feel like, as far as parings go, I would say if you’re paired with Patrick, you hear some of the worst stuff — Reed, not Cantlay — from the crowd. And, but, I mean, that whole thing was interesting last week, for sure.”

Was it at all annoying? Spieth said no. He’s heard worse. While DeChambeau heard a player’s first name, Spieth’s heard a rating of his game.

“I’ve had people tell me I suck to my face for a long time, so I don’t — you know, I mean, nothing, you just kind of zone everything out. But you certainly, I mean, any bad hole, someone was yelling it and then any good hole people were yelling, ‘Go Bryson’ almost louder. It was like a pseudo rivalry, and he’s not even here.”

Would there be something that would annoy you, Jordan?

“I don’t know,” Spieth said. “I mean, I get ‘Justin’ [Thomas] a lot because people get us two kind of confused a little bit. No, I wouldn’t — at this point, I would just, I would say my armor’s a little thicker than it used to be, so I feel like I could probably just laugh something off.”