Sergio Garcia gets unbelievably unlucky break off a flagstick at U.S. Open 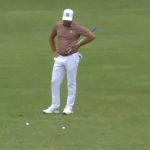 The U.S. Open is always a grind, but when you get a break as bad as Sergio Garcia did, it gets all the more difficult.

Sergio Garcia was in perfect position on the par-5 13th hole. He hit his drive into the rough, but his layup settled in the fairway just 50 yards from the green. The shot was as straightforward as can be for a professional golfer.

He stepped into the ball and hit his half wedge shot, nipping the ball with effortless spin. Unfortunately for him, the ball carried a little too much juice and the ball spun off the front of the green and rolled all the way back down to his feet.

No problem, he could still get up-and-down for par.

Again, Garcia sized up the shot, set up to the ball and nipped the ball off the seaside turf. The ball took a hop on the green 10 feet short of the hole and bounded toward the cup. But before it landed on the putting surface again, it clanked off the flagstick and redirected the ball straight back off the green.

“Oh no!” groaned announcer David Feherty. “That was gonna spin and finish probably four or five feet behind the hole. Now, he’s got to worry about it ending up in a divot.”

Garcia stood in disbelief with his hands on his hips as the ball trundled back down the hill fronting the green. It didn’t stop until it reached his feet.

Once again, he sized up the shot, set up to the ball and hit the shot. This time, the flagstick did not get in his way, but the shot was not nearly as crisp, and the ball ran out some 30 feet behind the hole.

Garcia walked to the green and two-putted for a double-bogey 7.

The U.S. Open is always a challenge, but sometimes the setup will kick you when you’re down. Garcia’s struggles are a prime example of that.