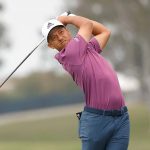 Xander Schauffele hits his tee shot on Friday on the 5th hole at Torrey Pines.

We’re at the halfway point of the U.S. Open at Torrey Pines, and there may be no bigger surprise than the one at the top of the leaderboard, where 48-year-old Richard Bland, he of one career victory (albeit last month), shares the lead with Russell Henley. Eighteen players are five shots back or better, including notable players such as Jon Rahm, Matthew Wolff, Xander Schauffele — and Bryson DeChambeau and Brooks Koepka. Who do you think is in the best position to make a run on Saturday’s moving day?

Zephyr Melton, assistant editor (@zephyrmelton): Is it a faux pas to say Rory McIlroy? He sits just on the edge of contention at six shots back, and with limited expectations for him to get back in the mix, it feels like the perfect storm for him to creep back up the leaderboard.

Josh Sens, senior writer (@joshsens): Xander Schauffele. He couldn’t quite get it out of neutral today.  But that won’t last. There’s just too much talent and too much home-course comfort for him to remain in idle on Saturday. Don’t be surprised by a Rahm-Schauffele pairing in the final group on Sunday.

James Colgan, assistant editor (@jamescolgan26): A Rahm-Schauffele Sunday pairing would either be utterly brilliant or utter disaster … and I’m not sure which. Still, I like Rahm’s chances on moving day. He managed to shoot a one-under 70 on Friday despite hitting just five fairways and 11 greens all day. Those are historical strengths of his game, and if he’s able to right the ship on Saturday, I could see him going low.

Josh Berhow, managing editor (@Josh_Berhow): Collin Morikawa is heating up. He was eight strokes better Friday than he was on Thursday and is just five off the lead. He putted much better in Round 2, and that’s the key for him. If he stays consistent there, he’s going to move up the leaderboard fast. We all know his ball-striking will give him birdie looks. He just needs to convert.

Tim Reilly, Director of Social (@LifeofTimReilly): Bryson. Did you catch his post-round walk and talk with GOLF’s own Dylan Dethier? Something came to Bryson in his sleep that led him to make the changes he needed to turn his U.S. Open fortunes around. I can’t remember the last time anything useful came to me in my dreams. The defending champion is trending in the right direction, and that’s a scary thought for the field. DeChambeau capped his chat with Dylan by saying that his game is feeling at a 9, 9.5 level right now. High praise for a man who never appears satisfied with where his play is at.

Nick Piastowski, senior editor (@nickpia): Brooks. Feels right that I follow up Tim’s answer with this. But I’m going to ride my pre-tournament pick until the bitter end. And why not? He looked lost off the tee today, but is still sitting just five strokes back, at a somewhat scorable Torrey. Clean that up — and continue to putt well — and he’ll be right there come Sunday.