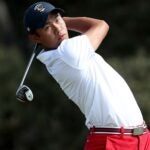 Collin Morikawa is one of the rare players to jump straight from college to the PGA Tour.

In most sports, player development is linear. Prospects go to high school and get recruited, go to college and then get drafted and player professionally. But progress to the pro golf ranks is rarely so neat and linear. Most PGA Tour players toil on development tours for a few years before getting called up to the show.

There are a few exceptions to this rule, in the case of the select few great players in each class. Just last year Collin Morikawa and Matthew Wolff earned their cards in only a handful of starts after coming out of college, and Viktor Hovland only had to drop down to the Korn Ferry Tour for a couple weeks to earn his playing privileges back. According to Golf Channel analyst Arron Oberholser, he’s fine with this model for golf.

“If you’re truly great, like those guys are,” Oberholser said on this week’s episode of GOLF’s Subpar. “Then you should be able to get it done to get yourself special temporary membership.”

This is just what many big-name young stars have done in years past. Jon Rahm and Jordan Spieth accomplished this feat within the last decade, and the previously mentioned trio of studs from last year did it, too. In Oberholser’s eyes, if you’re good enough, those seven sponsors exemptions should be enough to prove you’re ready for the rigors of the PGA Tour.

“I think that they’re trying to separate the good — and there’s lots of good PGA Tour players out there — from the great coming out of college,” Oberholser said.

Check out the entire episode of Subpar below as Oberholser discusses getting intimidated by the Tiger Woods, the famous Tiger stare and more.