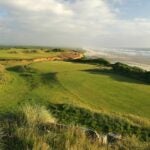 Bandon Dunes is one of golf's most popular (and beloved) courses.

Seven weeks ago, the U.S. Amateur at Bandon Dunes couldn’t have been further from the NBC Sports radar.

The event was set to be produced by NBC’s competitor, Fox Sports — as all USGA events had for the previous six years and, under the terms of its billion-dollar agreement, would for the following six. The time for negotiating live sports rights deals comes roughly once a decade, and it’s an incredibly high-stakes process. Networks have to negotiate the value of their projected advertising dollars against the threat of losing out to competing networks, while leagues rely heavily upon the money generated through deals to fund their growth.

In short, the USGA wasn’t looking to negotiate a new broadcast partner smack dab in the middle of its gargantuan agreement with Fox, and decades of accepted knowledge told us Fox wouldn’t dare jeopardize their deal.

As it turned out, an unprecedented situation presented Fox with an unprecedented opportunity. With a loaded fall schedule set to include baseball, college football and the NFL, Fox approached NBC about trading off this year’s U.S. Open (which has been delayed to September) to shift their focus toward those events. The two sides got to talking and soon after, NBC Sports announced it had absorbed the remainder of Fox’s contract with the USGA.

But veteran NBC Sports golf producer Tommy Roy, director Doug Grabert and their staff had no time to consider the business implications. Roy’s crew hadn’t done so much as a site survey on the Bandon property — customarily handled months-to-a-year in advance of a broadcast, particularly one held at a new location. Suddenly, they had a show in six weeks at a venue that’d never been shown on TV.

“Tommy and Doug have been doing this as our lead producer and director for a quarter of a century,” Golf Channel host Steve Burkowski said. “So they obviously were in that far left lane, hit the gas, how do we get up to speed?”

After finally landing on location, the NBC crew devised a plan: rather than fit the course to the broadcast, they would fit the broadcast to the course.

“There’s going to be a lot of movement because the terrain here at Bandon Dunes doesn’t necessarily allow you to put cameras and towers everywhere,” Burkowski said. “I guess it’s sort of that Chambers Bay feel of wow, this is not something we’ve visually seen before, so it’s going to be a lot of moving around, trying to showcase the golf, the beautiful scenery all around.”

The links-style setup at the Dunes course lent itself well to the NBC team, which hosts the Open Championship each year.

“The Open Championship presents similar sets of challenges in setup in terms of capturing views and trying to find tee shots and getting your cameras in certain areas to make sure that you can capture as much of the beauty as you possibly can,” said analyst Notah Begay. “That’s really been a benefit to us because the terrain and some of the links-style challenges in terms of infrastructure and operations, we’ve had to answer those similar types of questions over in Scotland and England in covering the Open.”

In many ways, fans can expect Bandon Dunes’ television debut to bear some resemblance the Open, but don’t expect to be transported entirely.

“I remember being here, I think it was Pacific Dunes in ’06 for the Curtis Cup, and Dan Hicks who was going to be hosting our coverage, it always sticks out to me 14 years later, he’s like, ‘it’s Pebble Beach without the houses,'” Burkowski said. “That is how impressive these views along the coastline are going to be.”

Heading U.S. Amateur week, the NBC team hopes the outcome will be a lean, agile show — a perfect complement to its host.

“You know, a little bit of everything, but what we’re going to be able to show for the next five days is going to be pretty impressive,” Burkowski said.