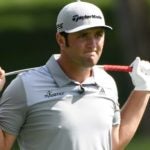 Jon Rahm was frustrated that a photographer moved during his swing at the PGA Championship.

Jon Rahm has always worn his emotions on his sleeve inside the ropes. But that emotional energy can actually be beneficial to the fiery Spaniard as he navigates through a round. The way he sees it, there’s no use in bottling himself up and trying to be something he’s not.

“It’s hard to go against who you are, to be honest,” Rahm said back in 2018. “What I (need) to play better is just letting myself feel my emotions, letting the emotions flow through me rather than trying to hold myself.”

Rahm has been true to that ethos this week at the PGA Championship, and on the 14th hole on Friday he put those emotions on full display. As Rahm lined up for a chip shot, a photographer in his line of sight moved and apparently distracted Rahm when he was playing his shot. Rahm immediately looked to the back of the green and gestured his displeasure.

“Guys, you’ve got to stand still out here,” his caddie yelled. “There’s not enough people out here. You can’t be walking all over the place.”

Rahm went on to miss the par putt to drop him to even for the tournament, and the frustration was written across his face. Rahm then walked to the back of the green and stood directly in front of the camera, blocking the shot of the green. You can watch the clip here.

This instance wasn’t the first time Rahm had a slight outburst at TPC Harding Park. He also batted a boom mic with his clubhead on Thursday following a poor drive.

Rahm shot a one-under 69 on Friday and is one under for the tournament. The projected cut is even par as the afternoon wave begins to tee off.