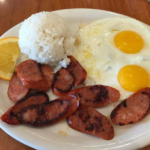 By now you’ve probably heard that Collin Morikawa won his first major at just 23 years old, joining Jack Nicklaus, Tiger Woods and Rory McIlroy as just the fourth player to win the PGA Championship at such a young age.

Morikawa, who now has more wins (three) than missed cuts (two) and who only has 29 starts under his belt, is now the game’s brightest rising star.

We’ve seen swing breakdowns, and learned about his girlfriend Katherine Zhu, who is a talented golfer in her own right. But what we didn’t know is how Morikawa fuels up, whether he’s training, on the course or somewhere in between.

Like any good athlete, he has a go-to Hawaiian-style breakfast that gives him enough carbs, fat and protein to get him through his day.

The best part about Morikawa’s breakfast is that the ingredients are simple enough that you can find them anywhere, making it easy to recreate. However, if you’re like me and prefer to work off a recipe, give this one a try.

If you’re feeling bold, you can add some soy sauce to your eggs and season the rice with furikake, a Japanese spice blend containing seaweed and sesame seeds.

Nutritionally speaking, Morikawa’s breakfast of a champion looks something like this:

It might seem like a lot of calories for breakfast, but given that golfers burn anywhere from 900 to 1,200 calories a round, it’s exactly what a Tour pro would need to help him keep his or her eye on the prize.