‘I was battling for my life’: Patrick Reed details his double-pneumonia scare 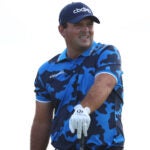 Patrick Reed shot an opening round of 72 at the Tour Championship after battling bi-lateral pneumonia.

After going over three weeks — and the entirety of the FedEx Cup Playoffs thus far — without competing, Patrick Reed carded an opening-round two-over 72 at the Tour Championship at East Lake. He’s not in contention, but rather than focusing on his finish, Reed was just grateful to get through 18 holes without any medical issues.

The 31-year-old Reed was making his first start since spending nearly a week in the hospital battling bilateral pneumonia.

Reed says he doesn’t know if his pneumonia was Covid related, but that the symptoms came upon him quickly.

“It hit me just like a brick,” he said. “I mean, just all of a sudden I went from feeling okay to literally feeling like I couldn’t breathe and was almost drowning in air and it was, it hit me so fast and it was so brutal.”

Reed said his pneumonia was “scary” because it was in his lungs’ lower lobes, “which is where a lot of deaths and people pass away from.”

“First couple days they were sitting there telling me that make sure you text your family quite a bit, talk to your family, because you just don’t know. I mean, this is not good. We’re not in a good spot right now,” Reed continued.

Reed said he worried about not having the chance to tell his wife, Justine, and their kids that he loved them, because they weren’t allowed to visit.

“It definitely puts you in a dark space when you’re in there, especially those first two days. But I’m so happy to have such an amazing team and such amazing doctors that were working with me to get me through it and to get me working in the right direction on the way up. And to think that I’m able to be here and play and really feel like today, I really felt okay. I mean, it’s a little frustrating not having the speed, not being able to hit the shots and really feel certain things quite yet, but I took a ton of time off. I mean, I was battling for my life. I was in the hospital. And the good thing is now I can hit the ground running hopefully.”

Reed says that if it wasn’t for the upcoming Ryder Cup, he wouldn’t be at the Tour Championship this week. But with a potential captain’s pick up for grabs, Reed is willing to do whatever it takes to get Steve Stricker’s attention.

“I saw him yesterday,” Reed said of Stricker. “He came out to me when I was on 9 and I hit a hybrid into 9 to eight feet and I made the putt for him. So you know, honestly, the biggest thing is, talking with Stricks and stuff, is just making sure I’m healthy and I think the biggest thing for me this week is just to see kind of where I’m at. And I know by Ryder Cup my game’s going to be where it needs to be, as long as I feel like my health is where it needs to be and as long as I feel like I can sustain through rounds of golf.”

The Ryder Cup begins on Friday, Sept. 24 at Whistling Straits, in Wisconsin.