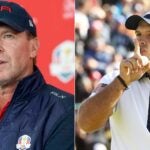 For the first time in nearly a decade, Patrick Reed won’t be on a Ryder Cup team. Reed was the highest-ranked player left off the squad that will represent the U.S. at Whistling Straits later this month.

U.S. captain Steve Stricker made his six captain’s picks on Wednesday to join his six auto-qualifiers, and Reed was passed over for Daniel Berger and Scottie Scheffler.

Stricker went right down the list and picked the players who finished 7th to 10th in the standings in Tony Finau, Xander Schauffele, Jordan Spieth and Harris English, but he skipped Reed, ranked 11th, to pick Berger (ranked 12th) and Scheffler (14th).

Reed, dubbed “Captain America,” has been one of the top U.S. Ryder Cup players and has long gushed about how important the event is to him. He owns a 7-3-2 record in his three Ryder Cup appearances and is 3-0 in singles play.

“Patrick Reed, that was a very, very difficult call,” said Stricker, who said Reed was his first call. “I kind of lost sleep over that one. He’s a tremendous competitor, he brings a lot to match-play golf. His record here at the Ryder Cup is pretty darn good. It was a very difficult call. It wasn’t an easy one. But I think it was just the uncertainty of his health, and really the lack of play that led to our decision down the stretch.”

Reed, 31, withdrew from The Northern Trust before the start of the first round on Aug. 19, went to the hospital that day and spent nearly a week there. He said he was diagnosed with bilateral pneumonia. Reed said he never tested positive for Covid-19 but that the pneumonia was serious.

“First couple days they were sitting there telling me that make sure you text your family quite a bit, talk to your family, because you just don’t know,” Reed said on Thursday, after his first round of the Tour Championship. “I mean, this is not good. We’re not in a good spot right now.”

Reed missed the BMW Championship and said he wouldn’t have played the Tour Championship if it wasn’t for the Ryder Cup looming, but he knew he neeed a pick to be on the team. He finished 25th at East Lake, his first start since a T31 at the WGC-FedEx St. Jude Invitational on Aug. 8.

Reed said he had a chance to talk to Stricker on Wednesday of the Tour Championship.

“He came out to me when I was on 9 and I hit a hybrid into 9 to eight feet and I made the putt for him,” Reed said on Thursday. “So you know, honestly, the biggest thing is, talking with Stricks and stuff, is just making sure I’m healthy and I think the biggest thing for me this week is just to see kind of where I’m at. And I know by Ryder Cup my game’s going to be where it needs to be, as long as I feel like my health is where it needs to be and as long as I feel like I can sustain through rounds of golf.”

In his last Ryder Cup appearance, Reed was critical of captain Jim Furyk and Spieth after the U.S. team’s loss in Paris in 2018. Reed, who had played well with Spieth in previous events, went 0-2 with Tiger Woods that week while Spieth and Justin Thomas were 3-1 together. Reed told The New York Times that “the issue’s obviously with Jordan not wanting to play with me. I don’t have any issue with Jordan.” Reed added, “for somebody as successful in the Ryder Cup as I am, I don’t think it’s smart to sit me twice.”

In the only team event since the 2018 Ryder Cup, at the 2019 Presidents Cup at Royal Melbourne, Reed’s caddie/brother-in-law Kessler Karain was banned from Sunday singles after a physical altercation involving a fan.

But those controversies were never brought up by Stricker on Wednesday.

“He took it like a true champion,” Stricker said. “I apologized many times to him and just wanted to make sure he knew it was a very difficult decision. He handled it like a champion and really took it well. Very disappointed as you could imagine, but he said all the right things and handled it very well.”

The Ryder Cup is Sept. 24-26 at Whistling Straits in Kohler, Wis. Europe has won four of the last five meetings.