When Rory McIlroy and friends overpower Seminole this weekend, it could influence the distance debate 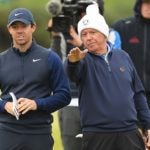 This is the third installment in a five-part Bamberger Briefly series about the TaylorMade Driving Relief charity event, to be played on Sunday afternoon at Seminole Golf Club, a landmark Donald Ross course in South Florida.

The most important moment of Sunday‘s big match at Seminole Golf Club will happen at the conclusion of the telecast. It will be a game-changer.

Two former U.S. Open winners, Rory McIlroy and Dustin Johnson, will stand two club lengths away from one another (social distancing will be observed) while reviewing their sizzle reel with Mike Tirico of NBC Sports.

The camera will turn to Rory who will say, “You know, Mike, my dad’s a member here, and it’s one of the best courses, anywhere.”

The Northern Irishman who lives in South Florida will purse his lips, cock his head, unsure for a nanosecond whether to continue with his customary candor. And then he will.

“The only thing that gives you pause is how far Dustin and Matt Wolff and I hit this modern golf ball, and you could even put Rickie on that list,” Rory will say, citing the whole Sunday gang. “None of us hit anything longer than a 5-iron into any of the par-5s, which means they really aren’t par-5s. I mean, they are for my dad and his buddies here. This course is a classic. This could be a U.S. Open course! But not without par-5s.”

This dream presented to you by Rollitback.

At least four good things are going to happen on Sunday at Seminole.

*Millions of dollars will be raised for a charity called Screw You, COVID-19!

*Millions of people, craving to watch live golf played by world-class golfers, will get the chance to do so.

*Seminole, never before seen on live TV, will have its public debutante party, at age 91.

*The golf world, by seeing Seminole’s four par-5s play like not-very-long par-4s, will finally understand the wisdom of the USGA and R&A’s effort to control ball and club distance, and course length, for elite players.

Jack Nicklaus has been saying for 40 years that the ball goes too far, and that classic courses, as venues for events with the game’s best players, are jeopardized by it. It is not, broadly speaking, an opinion that has caught on like wildfire. Sunday will represent a fresh start.

Seminole will be the site of next year’s Walker Cup match. That will give Jimmy Dunne, the Seminole president, and Mike Davis plenty of opportunity to compare notes and their wish lists. McIlroy, as the son of a Seminole member, as a U.S. Open winner, as a former GB&I Walker Cupper, can offer his insights. He can help chart a course. He can persuade the lodge brothers — his fellow touring pros — that the time has come.

Tipping points are movements. Movements start with people. They start with a message. Enter Rory, a microphone under his chin.