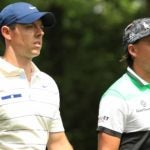 Rory McIlroy and Rickie Fowler will be on opposite sides of a charity skins match May 17th.

The official PGA Tour restart won’t come until mid-June, but four of its stars are set to return to the world of televised golf in a two-on-two skins game May 17.

Rory McIlroy and Dustin Johnson will take on Rickie Fowler and Matthew Wolff in the team event called TaylorMade Driving Relief, which will be held at Seminole Golf Club in Juno Beach, Fla.

In addition to the return of a major sport, the event will mark Seminole’s television debut. The exclusive Florida course has gained acclaim not just for its oceanside geography but also for its clientele, particularly at the annual Pro-Member, which typically attracts the top names in the game.

Club President Jimmy Dunne said he was honored to welcome golf fans to the course. “This match is a pure public service, with all money raised providing COVID-19 relief to those most in need in Florida and around the country, and Seminole is thrilled to have the opportunity to contribute to such a worthy cause at this difficult time.”

McIlroy, Johnson and Wolff all play TaylorMade throug the bag, while Fowler plays a TaylorMade ball. McIlroy is also an ambassador for UnitedHealth, while Fowler has been a longtime spokesman for Farmers, each sponsors of the event.

“It’s been difficult to witness what so many are enduring over the last several weeks due to the COVID-19 pandemic,” McIlroy said in a statement. “I hope that we can provide some respite and entertainment for those tuning in across the globe. Dustin and I will have a lot of fun together and our games will fit well as we push to raise funds and awareness on May 17.”

“When I heard about this event, I couldn’t get involved fast enough,” Fowler added in the release. “It’s special to be able to have an impact and raise charitable contributions through our sport and to do it with Matthew as a partner. I know how much I have missed sports and golf, especially, so to be one of the first events returning to television is very exciting and I’m proud to have Farmers, one of my sponsors, be a partner of this event as well.”

NBC Sports’ Mike Tirico will provide commentary from his home in Michigan, while analysts Paul Azinger and Gary Koch will add commentary alongside Rich Lerner, who will offer play-by-play from an off-site production facility. Jerry Foltz and Steve Sands will report from on site.

UnitedHealth Group is donating the $3 million prize pool to raise money and awareness for the American Nurses Foundation and CDC Foundation, per the release. Farmers Insurance has added an additional $1 million to back a birdies-and-eagle pool to benefit Off Their Plate, a charitable organization helping COVID-19 healthcare workers and impacted frontline shift employees. A Text-To-Donate option will be available to viewers, as well as an an online donation platform.

The event will be aired live from 2-6 p.m. (ET) on NBC, Golf Channel, NBCSN and Sky Sports, and will be streamed for free on PGA Tour Live.