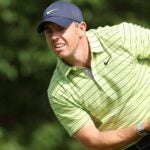 TULSA, Okla. — The hill behind the ninth green at this week’s PGA Championship is the steepest slope on property. It puts the “hills” in “Southern Hills,” leading from an elevated green to the even-more-elevated clubhouse beyond. And at 1 p.m. on Thursday, Rory McIlroy bounded up that hill, grin on his face, five-under 65 on his scorecard.

His exuberance came in obvious contrast to playing partner Tiger Woods, who made a cautious ascent as he favored his good leg. But the difference was something more than just youth and good health; McIlroy’s opening round was something much bigger. He ran up the hill like a man with a weight off his shoulders.

McIlroy won four major championships by the age of 25. He’s 33 now. In the years since his win at the 2014 PGA Championship he’s won everything else professional golf has to offer. But McIlroy’s major shortcomings have come as the result of one major shortcoming: His opening rounds.

Statistician Justin Ray has been tracking McIlroy’s Thursday malaise ever since. Entering this week, here was the breakdown since the beginning of 2015:

That’s a remarkable difference, especially considering opening rounds often involve easier conditions. McIlroy has played his way out of majors on Thursdays only to come roaring back to the edge of contention on the weekend. It hasn’t been quite enough. Even when McIlroy closed with a heroic eight-under 64 at last month’s Masters to surge into solo second, there was a skeptical undertone to the reaction.

Where was this on Thursday?

But on Thursday in Tulsa, McIlroy came out firing. Poor wedge play is the hallmark of a Disappointing Rory Round, but at No. 12 — his third hole of the day — he hit his 86-yard approach inside two feet. He overpowered the par-5 13th for another birdie. At No. 14 he hit a long iron to 26 feet and drained the putt. And at No. 15 he hit another wedge close and poured that in, too. Four birdies in a row. Solo leader.

“I’ve been playing well coming in here. I’ve been carrying some good form,” he said. “Obviously that took a lot from that last round at Augusta, played well up in D.C. at the Wells Fargo there, and played good in the practice rounds earlier this week.”

He carried that confidence throughout the day, pummeling driver everywhere he could. He said the course looked like a place where he could be aggressive off the tee, which is the sort of thing you say when you feel good about your driver. He gained two shots on the field with driver alone, per strokes gained. He gained three more on the greens, taking advantage of tame speeds to ram putts off the back of the cup. He made the turn and birdied No. 2 and No. 5 to get to six under for the round, three shots clear of the field.

“I think when your game is feeling like that, it’s just a matter of going out there and really sticking to your game plan, executing as well as you possibly can, and just sort of staying in your own little world. I did that really well today,” McIlroy said.

That part was particularly important. Thousands lined the ropes, eager to see the Super Group in action, McIlroy and Woods and Jordan Spieth. McIlroy has said in the past that playing in front of a Tiger Crowd can add a shot or two to your score, but a hot start and Southern Hills’ “big wide corridors” meant he had room to breathe and to focus.

He also quickly quashed any doubt about who would emerge as low golfer of the group. McIlroy beat Spieth by seven and Woods by nine.

“When you get off to a good start like that, sometimes you can maybe start to be a little careful or start to give yourself a little more margin for error, but I stuck to my game plan,” McIlroy said.

His day wasn’t perfect. He followed the birdie at 5 with a three-putt bogey at the par-3 6th and then made another bogey at the long par-3 8th. But he punctuated the round with a downhill, curling birdie putt at No. 9, which is set in an amphitheater of energetic fans.

He’s conquered his first-round demons. He leads the PGA Championship. Now all Rory McIlroy has to do is outplay the best golfers in the world for three more days.

How hard could it be?