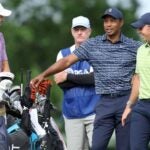 The super-group of Tiger, Jordan and Rory was the main attraction at Southern Hills on Thursday.

TULSA, Okla. — As soon as tee times were released at the 104th PGA Championship, the buzz started to build.

The 8:11 a.m. starting time off 10 jumped out immediately. Tiger. Jordan. Rory. Any time you get three players grouped together that are known only by their first names, that’s a hell of a cluster. On Thursday at the PGA Championship, that group was the main attraction.

By the time the trio made its way to the tee box just off the clubhouse this morning, the stands were at max capacity. Fans with the best seats had been there since the gates opened. Those who didn’t nab a seat lined the ropes down the fairway.

Fortunately for me, golf writers are granted inside-the-ropes access, so braving the crowds wasn’t necessary. I took full advantage and followed the super-group of Tiger Woods, Jordan Spieth and Rory McIlroy throughout the day. Below are five observations from the round.

When Rory McIlroy is playing well, he has a certain strut — and that strut was on full display on Thursday. It started when he made four straight birdies on the front nine, and it never left after that.

After a seven-birdie, two-bogey day, McIlroy’s name sat atop the leaderboard. He capped it off with a nifty birdie at the last, and he strutted — or, rather, ran — up the hill behind the green as he made his way to scoring.

Safe to say Rory is feeling himself.

It’s no secret that Tiger Woods isn’t 100 percent healthy, and it was easy to see from up close. Grimaces and winces were a common sight during Round 1, and Woods was clearly struggling to put much force on his right leg.

“I just can’t load it,” he said. “Loading hurts, pressing off it hurts, and walking hurts, and twisting hurts.”

Without the ability to load onto his right side, Woods struggled with early extension and a persistent right miss.

“My leg is not feeling as good as I would like it to be,” he said. “We’ll start the recovery process and get after it tomorrow.”

I can probably count on one hand the number of fans I saw today that didn’t pull out their phones as the super-group walked past. Fans snapping pics for posterity (and social media clout) at golf tournaments is not a new development, but the super-group amplified the craze. As soon as the golfers were within range for an iPhone to snap a picture, fans held their devices at the ready.

Ironically, there are signs posted throughout the grounds that instruct fans not to use their phones while watching play. The sign says to put phones in “Golf Mode,” and prohibits photos and videos within 100 yards of play.

It didn’t quite work out that way when the super-group played through.

Tiger Woods’ Thursday was … not great. He made seven bogeys during his opening round, and his 74 was nine shots worse than McIlroy’s mark. There were a number of things that were to blame for Woods’ tough day, but his play from the bunkers cost him at least a few shots.

“All the bunker shots sort of came out hot,” Woods said. “The sand is a lot faster than I thought it would be. Kind of been that way all week.”

He said that when in the Southern Hills bunkers, it can be a bit of a guessing game knowing how much sand to take. And on this day, he was guessing wrong.

Ian Poulter pointed out the difficult bunker conditions yesterday on his Instagram story (and later when I sought him out for comment). He predicted that many players struggle with the conditions in the sand. It didn’t take long to be proven correct.

Jordan Spieth’s putter has been a bugaboo all season — he ranks 175th in SG: Putting — and those woes continued on Thursday. He needed 33 putts to get around Southern Hills during his opening-round 72, and he never quite figured it out on the greens.

Several times throughout the round, Spieth hit a putt and walked after it immediately after impact, hardly the sign of a confident putter. Whether it is an alignment issue or a technique flaw is unclear. What we do know is that he’s behind the eight ball if he hopes to complete the career Grand Slam this week.