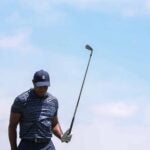 TULSA, Okla. — There’s only one thing worse than missing the fairway with a driver:

Missing the fairway with an iron.

Tiger Woods played alongside Rory McIlroy and Jordan Spieth during Thursday’s opening round at the PGA Championship. And while McIlroy dismantled Southern Hills by pummeling driver everywhere — and hitting fairways in the process — Woods stuck to a more conservative strategy but struggled to execute.

Woods’ tournament couldn’t have started any better. He hit the 10th fairway with his opening tee shot and flagged his approach to three feet. He canned a birdie putt at No. 14, too, jumping onto the leaderboard’s first page.

But his first unforced error followed immediately thereafter. Woods mishit his 2-iron off the tee at No. 15, leaving himself a lengthy approach from Southern Hills’ tangly bermudagrass rough. He found the front bunker, splashed his approach 20 feet past the hole and settled for bogey.

Missing with long irons would become a theme as the day went on. At No. 4, Woods missed left off the tee with the same 2-iron, found the front bunker and made bogey. He hit 2-iron on the 249-yard par-3 8th hole, too, missed right, found the bunker and made bogey. At No. 9 he hit 2-iron so far right he hit a tree and bounced into the middle of the fairway less than 200 yards from the tee. He hit his approach long, leaving a nearly impossible up and down. A final bogey there meant four-over 74.

Woods has always been a conservative player, relying on flawless execution and keeping big risks off the card wherever possible. His mid-irons have generally been as good as other pros’ short irons, and he has famously won even while laying back off the tee, like the stinger-centric Open Championship at Hoylake in 2006. But that strategy only works when the stinger cooperates.

Woods acknowledged his breakdown in execution after the round.

“Well, I wouldn’t have been so far back if I would have hit the iron shot solid and put the ball in the fairway,” he said. “I was playing to my spots, and those guys obviously have a different game plan.”

Different game plan is right. McIlroy appeared to see the course through a completely different lens.

“I feel like this course lets you be pretty aggressive off the tee if you want to be, so I hit quite a lot of drivers out there and took advantage of my length,” he said. “And finished that off with some nice iron play and some nice putting.”

Here’s the thing: When Woods hit driver he actually hit it quite well. All three players in the group hit 10 of 14 fairways. But Woods averaged 293.4 yards off the tee. Spieth was at 319.3. And McIlroy averaged 331.6. McIlroy is longer than Woods, but he certainly isn’t 40 yards longer.

It’s easy to criticize strategy post-round. Woods’ score was an indictment of his game and his body as much as his strategy. Perhaps his approach would have worked better had his body cooperated, but his right leg appeared to fail him midway through his first nine, exacerbating his misses. To succeed with a surgical approach, you need a surgeon’s precision.

“Loading hurts, pressing off it hurts, and walking hurts,” he said post-round.

Woods acknowledged the difference between him and his playing partners is a generational divide in professional golf.

“The game is played very differently now, and it’s very aggressive,” he said. “We were talking about it today, [caddie Joe LaCava] and I, the days of the Lee Janzens and the Scott Simpsons and the Faldos of the world, playing that kind of golf is gone. You go out there and hit driver a lot, and if you have a hot week, you have a hot week and you’re up there.”

By “you,” of course, Woods doesn’t mean himself. He’s sticking to an old-school game plan. One hole stretch showed it all: At No. 4, Woods missed the fairway with 2-iron and left a tricky approach from 149 yards. McIlroy hit the fairway with driver and had just 45 yards left. Woods found the front bunker, hit that bunker shot too far and got up-and-down for bogey. McIlroy hit a neat wedge shot just past the pin, just missed the eight-footer for birdie and tapped in for a disappointing par.

“The game is just different. It’s much more aggressive now, and I know that. But I was playing to my spots,” Woods said. “If I would have hit the ball solidly on those two holes and put the ball in the fairway, I would have been fine. I would have had 9-iron, 8-iron in there. That’s not a big deal. But I didn’t do that.”

We’ll see if Woods adapts his approach for Friday’s round. We’ll see how his body recovers, too. He deserves plenty of leeway; finishing in the middle of the pack is more than respectable considering how far he’s come since last year’s car crash. But Woods isn’t here for moral victories. He’s interested in contending. On Thursday, the competition left him in the dust.

It’s up to Woods to catch up, however he can.