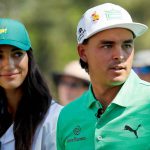 Rickie Fowler and his wife, Allison Stokke, are expecting the birth of their first child.

Just days after Jon Rahm’s win on his first Father’s Day at the U.S. Open, the PGA Tour has its newest expectant dad.

Rickie Fowler and wife Allison Stokke Fowler announced on Monday that they are expecting a child in November, their first. “Reservation for November…Fowler party of 3,” the five-time PGA Tour winner posted on Instagram Monday announcing the news.

A post shared by R I C K I E (@rickiefowler)

At the Travelers Championship on Wednesday, Fowler expanded further on the big news, sharing some insight into the couple’s last few months.

“I’m trying to see if we’re sharing a whole lot or not. I can share a little bit,” he said. “We found out the week of Honda, so we’ve known for quite a while.”

Of course, no conversation around prospective fathers would be complete without an earnest acknowledgement of the newly anointed king of “fatherly perspective,” Jon Rahm. So many folks around the game speculated that the birth of Rahm’s first son, Kepa, in April would help the 26-year-old Spaniard’s game mature, it became part of golf lore. On Sunday, his first Father’s Day, Rahm won his first major championship at the U.S. Open.

In recent months, Rickie and Allison have been focused on keeping the news a secret from the public eye. While it’s a surreal experience, the reality of what is soon to come has begun to settle upon the future mom and dad.

As for whether we can expect to see baby Rickie rocking a similar hue of orange on Sundays? The jury is still out.

“It’s at that point where it’s pretty cool and pretty special,” he said. “I think a lot of it early on was just making sure things were going smoothly, making sure Allison was healthy, feeling good, making sure the baby was healthy. We’re all good in that department.”