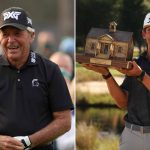 Garrick Higgo has been one of the hottest players on the planet over the last two months, winning three times and adding another top-five finish in six starts. The 22-year-old capped off the spectacular run with his first PGA Tour win on Sunday, outlasting the field at the Palmetto Championship for a one-shot victory.

The win makes Higgo the first South African 22 years old or younger to win on Tour since Gary Player in 1958. As it turns out, Player was in Higgo’s ear all week imparting his wisdom on the up-and-coming star.

“He phoned me this morning, actually, and he told me he’s done it before quite a few times, the way he’s won from six behind, seven behind,” Higgo said after his win. “He just said, ‘Don’t think too much about what the other guys are doing, just kind of do your thing and stay up there, and you never know what could happen.”

Higgo is still a long way from compiling a resume as stout as his fellow South African, but if he continues to heed Player’s advice, a bright career could be in store.

The reason for Rickie’s slump

Rickie Fowler just missed out on qualifying for this week’s U.S. Open as he continues to grind through a slump that dates back to 2020. There are a number of reasons for Fowler’s struggle, but according to one GOLF Top 100 Teacher, his streakiness can be attributed to a swing that relies on timing.

“It’s a study in hand track and geometry,” said Jonathan Yarwood in a recent video he posted on Twitter. “The club still stays outside [his hands] at the start, and when he comes to the top, he rotates and it falls behind him.”

These positions put Fowler is a place where the club over-shallows on the downswing, with a late move with his hands that forces the club to steepen at impact. This move can work well with iron shots, but with the driver it can be unreliable.

“I think driving lets him down as a result of that,” Yarwood said.