2020 RBC Heritage live coverage: How to watch Round 2 on Friday 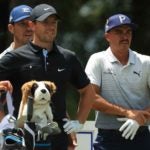 Rory McIlroy and Rickie Fowler will play together again in Friday's second round at the 2020 RBC Heritage.

The first 18 holes are complete at the 2020 RBC Heritage Classic, and the stars of the PGA Tour are set to battle it out again on Friday at Harbour Town. Here’s what you need to know to follow the second round action.

One name to keep a close eye on is Jordan Spieth. The three-time major champion is a specialist in producing dramatic roller-coaster rounds, and the opening round at the Heritage was no different. Spieth made an early triple-bogey 7 to fall to three over, but then clawed back with an astounding six-birdie stretch over his second nine, adding another birdie at his final hole to reach five under. Spieth begins the second round on Friday at 12:43 p.m. ET.

One player who one-upped Spieth on Thursday was Ian Poulter. The veteran English pro shared a video of himself gettinga Covid-19 test at the RBC Heritage on Wednesday and followed it up with a seven-under 64 in the first round. Poulter’s tee time for Friday is 12:54 p.m. ET, and he’ll once again play alongside Sebastián Muñoz and Patton Kizzire.

Rory McIlroy and Rickie Fowler were paired together in the first round, but their scores went in opposite directions. McIlroy struggled to a one-over 72, while Fowler cruised to a four-under 67. They tee off for the second round at 1:05 p.m. ET on Friday.

How to watch RBC Heritage Round 2 on TV

Golf Channel will broadcast the second round of the RBC Heritage on TV. They will air three hours of coverage from 3-6 p.m. ET on Friday, June 19.

How to stream RBC Heritage Round 2 online

For those of you with an active cable subscription, streaming the entire second round of the 2020 RBC Heritage online will be easy. You can watch the full second round Golf Channel broadcast on golfchannel.com. Fans can also view Featured Group coverage of the second round all day Friday via PGA Tour Live, though you will need an account to access the stream.