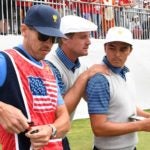 Bryson DeChambeau and Rickie Fowler pictured at the 2019 Presidents Cup.

Fan favorite Rickie Fowler didn’t have his best game for the PGA Tour’s return at the Charles Schwab Challenge, though he thinks he’s in a much better place for this week’s RBC Heritage. But he had another player on his mind on Tuesday: Bryson DeChambeau.

In his pre-tournament press conference at Harbour Town, Fowler was asked about DeChambeau’s massive weight gain and the resulting increase in swing speed and distance the five-time Tour winner has produced of late.

While he made it clear that it’s “really impressive to see what [DeChambeau has] done” to better his game, Fowler also offered up a potential downside to Bryson’s quest for faster swing and ball speeds, namely his ability to control the golf ball.

“It will be interesting to see kind of… where the peak is,” Fowler told reporters on Tuesday. “Where does it become almost counterproductive as far as like too much speed, where dispersion becomes too great. There has to be some sort of peak in there. It seems like it may be around the 190 area. It gets tough to control the ball going straight once you get to the 200-plus area.”

It’s a very fair question to ask, because surely there has to be some limit both the max swing speed DeChambeau is able to produce and the maximum speeds current golf ball technology can handle without causing accuracy issues. For the record, DeChambeau has gained about 40 lbs. since his speed mission began, 20 lbs. of which he added to his frame during the three-month layoff alone.

The specific swing speeds Fowler identified are also interesting. Back in January, DeChambeau claimed he had reached 200 mph ball speed with his driver, and last week he was clocked surpassing the 190 mph peak Fowler suggested.

To close out his point, Fowler used the World Long Drive competitors as an example of the possible limits to driving distance in golf, and the resulting negative effects on accuracy.

“The long drive guys, obviously, have a lot of speed, but they can get away with 1 in 8 in the grid,” Fowler said, referring to the wide football-field sized grids Long Drive competitors hit onto. “1 in 8 won’t do very well out here on Tour. But it is impressive. We’ll see kind of how it works.”

We’ll get another chance to see how DeChambeau handles his ever-increasing swing speeds on Thursday at the Heritage. DeChambeau tees off at 12:43 p.m. ET on the 1st tee at Harbour Town, with Fowler starting on the 10th tee at 7:40 a.m. ET.