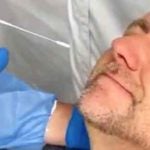 Ian Poulter during his Covid-19 test at the RBC Heritage.

Last week’s Charles Schwab Challenge marked the end of a 13-week-long hiatus on the PGA Tour. Aside from the most obvious peculiarity of the tournament — the striking absence of fans lining the course and in the grandstands — the players and caddies were also subjected for the first time to an unusual procedure: rigorous Covid-19 testing.

The process, which is in place again this week at the RBC Heritage, in Hilton Head, S.C. (and beyond), begins with a temperature check. If cleared, the players and caddies then move on to Covid-19 testing, where a six-inch-long nasopharyngeal swab is inserted into their nasal cavity for 15 seconds, and subsequently sent to a laboratory for processing.

If either a player or caddie were to fail the test, they would not be permitted to participate in the tournament and immediately sent home.

In a video posted to his Twitter and Instagram feeds, Ian Poulter illuminated what the swab portion of the testing looks like in action. The video — which has nearly 400,000 views on Twitter — shows the Englishman reacting to the swab with pained face-rubbing, foot-stomping, vigorous head-scratching, before concluding with 10 slaps to the side of his head and a hearty laugh.

“I’d like to call that the sweet spot,” the tester told Poulter from offscreen after removing the swab.

“Ah, no, you got the money spot … you got it,” was all Poulter could muster in response.

For the second straight tournament, the PGA Tour reported no positive coronavirus test results among attendees of the events. According to Bob Harig of ESPN, the Tour has administered a total of 954 tests between Colonial and Harbour Town.

Poulter tees off in the first round of the RBC Heritage at 7:29 a.m. Thursday with Sebastian Munoz and Patton Kizzire.