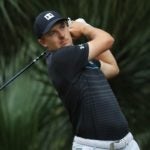 Jordan Spieth had a slow start but rebounded in a big way at Harbour Town.

Jordan Spieth’s opening round at the 2020 RBC Heritage got off to a crooked start, but an incredible stretch of birdies on his second nine helped the three-time major champ claw out of a big hole and into contention with a five-under 66.

Expectations were high for Spieth on the eve of the first round after his T10 finish last week at the Charles Schwab Challenge. It seemed like the Heritage was as good a tournament as any for him to finally capture his first Tour win since 2017.

But things went haywire early. At his third hole of the day, the par-4 12th at Harbour Town, Spieth sprayed his drive wide right into a penalty area. It took him two more shots to reach the green, where he three-putted for a triple-bogey 7. Not the start he wanted.

Spieth steadied his game to close out his first nine, recording one birdie and five pars before his round took a dramatic turn for the better, to say the least: Spieth made six-straight birdies from holes 2-7 at Harbour Town.

And while he’s known as one of golf’s great putters, it was Spieth’s iron play that led the charge.

Over that six-hole stretch, the second-longest putt he faced was 7’8″ at the par-5 2nd, which, of course, he calmly stroked in. At the 3rd he sank a 5’4″ putt that moved him back to even par on the day, a fine achievement in its own right. At the par-3 4th, Spieth stuck his tee shot inside 3 feet, giving him his least-stressful birdie putt of the streak.

After a layup at 5, a par-5, Spieth again knocked his approach to inside 3 feet and made the ensuing tap-in for his fourth consecutive red number. At 6 he set himself up with a slightly longer 7’4″ birdie putt, but he rolled that one in as well.

At that point, Spieth had launched himself from the bottom of the leaderboard to three under, just two shots short of the early lead. Amazingly, he would narrow that margin again at the 7th. There he faced the longest putt of his six-hole stretch, a full 12 feet. No problem for Jordan, who confidentially stroked that one in for his sixth straight birdie.

The birdie at 7 moved Spieth to four under, just one shot off the lead. After a par on 8, he closed his second nine with another birdie on 9 to sign for a 29, which tied him for the clubhouse lead at the time.