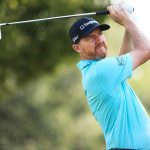 Jimmy Walker managed to overcome a rare two-shot penalty to make the cut at the Valspar Championship.

Longtime Tour pro and 2016 PGA champion Jimmy Walker was assessed an ultra-rare two-shot penalty on his opening hole at the Valspar Championship on Friday. The reason? He missed his tee time.

Walker was scheduled to tee off at 7:39 a.m. ET on Friday, alongside fellow major winners Justin Rose and Danny Willet. But according to pgatour.com, Walker was still in the practice area when it was time to tee off. An official located him there a minute before his appointed time, but Walker was still unable to make it to the tee in time.

According to Rule 5.3a, if a player fails to arrive to the tee on time, they are subject to disqualification. But because Walker arrived within five minutes of his appointed tee time, he was allowed to play but subject to the general penalty of two strokes on his first hole.

Unfortunately for Walker, that meant his opening par became a double bogey, pushing him to three-over for the tournament (Walker was one-over after a first-round 72). After suffering another bogey on the par-3 4th hole, it looked like Walker’s chances of playing the weekend were slim. But Walker rallied, birdieing the 6th, 7th and 9th holes to get back to even par on the day. Two more birdies followed on the back nine on 11 and 14, and after parring out from there, Walker’s total of two-under 69 in the second round brought him back to one-under for the tournament.

As an early finisher, all Walker could do then was wait. And as it turns out, he did just enough, making the cut on the number.

“Pro tip…. don’t be late for your tee time,” Walker posted on Instagram. “30yrs in Tourny golf and that’s a first. I hope we get to play the weekend.”

With another early tee time scheduled on Saturday, no doubt Walker was paying extra-special attention to the clock this time around.