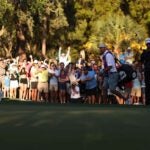 Sam Burns on Sunday after his birdie on the second hole of a playoff.

PALM HARBOR, Fla. — This Valspar tournament that ended on Sunday, the last moments of the month-long Florida Swing, was the throwback of throwbacks. The whole thing, really. The course, the clubhouse, the leaderboard. A bunch of young Southern golfers, out of old Southern universities, contending. Paint cans for tee markers. Reserved parking spaces for former winners painted with all your favorite Valspar paint colors.

Some of you remember the Tour in its Southern era, when a fan in a T-shirt screamed “Free Bird” at rolling putts in Atlanta and Greensboro and Charlotte. Paging Jerry Pate and Andy Bean, and, while we’re at it, Davis Love and Justin Leonard. Well, on Sunday here, on the last day of the month-long Florida Swing, this Tour was Southern again. This Sunday afternoon was no-fuss, no-pontificating, get-it-done golf.

Justin Thomas, also 28, a son of Louisville who went to Alabama;

Davis Riley, 25, born and raised in Hattiesburg, Miss., and an Alabama golfer a few years after Thomas;

Before heading to a resort ballroom that had been converted into the player locker room, Thomas gave Riley a bro hug and said, “You know what to do.” Thomas was one shot out of the Riley-and-Burns playoff, and he had to be hot. But Tide pride is Tide pride.

NeSmith was in the day’s final twosome. He didn’t look at scoreboards. He didn’t worry when things went south. He said his goal was to “play 18 holes and enjoy the walk.” How’s that for Southern charm? He was a shot out of the playoff, too.

One shot better than those two were Burns and Riley. Their two-man, sudden-death playoff started on the par-4 18th. It’s one of the hardest things to do in tournament golf, to go from  stroke play (the first 72 holes) to match play (the playoff). In stroke play, you’re waiting for your chances. In match play, you have to seize the moment. You have to grab it. One of the things that made Tiger Woods Tiger Woods was his incredible ability to make that move. His PGA Tour playoff record is 11 wins, one loss. Sunday night here — a gorgeous Southern night, the air cooling and dry — somebody was going to win a playoff.

In 2018, Woods gave Burns the pep talk of all pep talks. They had played together on Sunday at Honda. Burns’ top-10 finish there got him into the following week’s tournament, which that year was the Valspar event. “He played beautifully,” Woods said that day. “Top-10 gets him into Tampa.” Ever since, Woods has had his eye on Burns, as a player to watch. Burns won his first Tour event here just last year. As Andy Bean once helped Davis Love find his footing on Tour, Woods did the same, in his own way, for Burns.

One thing any player learns from watching Woods over the years is that you don’t need to play perfect golf, or anything like it, in order to contend. And if you can contend, you can win.

After two pars on 18, Burns and Riley went to the par-4 16th hole. Burns hit it short and in the left rough. Riley was about 25 yards ahead of him and in the fairway.

Burns did not care.

His second shot was a pull, too, finishing hole high but about 40 feet from the hole.

Burns did not care.

He buried the putt. Riley’s chip shot did not go in. Game, set, match. Handshakes.

“I think in the past I would have said that you have to play perfect in final rounds to have a chance to win, and in reality, that’s just not the case,” Burns said. Yep, he’s won this tournament in back-to-back years.

“Walking there off 16, Davis is in the fairway 20 or 30 yards closer [to the green] than me and I’m in the rough. Odds are in his favor. But everyone knows that in the game of golf anything can happen. That ball went in. It very well could not have.”

Anything can happen and will.

And of course he remembered his round with Woods from four years ago. “I feel like I gained some confidence from that round,” he said. “It was a cool opportunity for me to play with him on a Sunday and just get to watch him up close. That was always a dream of mine to do that. So it was also nice that I was able to play really well that day and ultimately top-10 to get into this. It was definitely a special day.”

He remembered first playing with Burns when they were maybe 11 or 12 years old, “duking it out.”

He made a triple bogey on 5 because he hit “just a bad tee shot.”

Burns and Riley played each other in high school and in college and now they have faced each other in a Tour playoff. These two sons of the South. The winner won with a mediocre tee shot, an OK second — and a great putt. Davis Riley knows how it goes. Because that’s how it goes.

“Davis is a heck of a player,” Burns said. “Davis and I have been friends for a long time. We’ve played a lot of golf together. Unfortunately, he went to Alabama.”

No, he’s not gonna give it a rest.