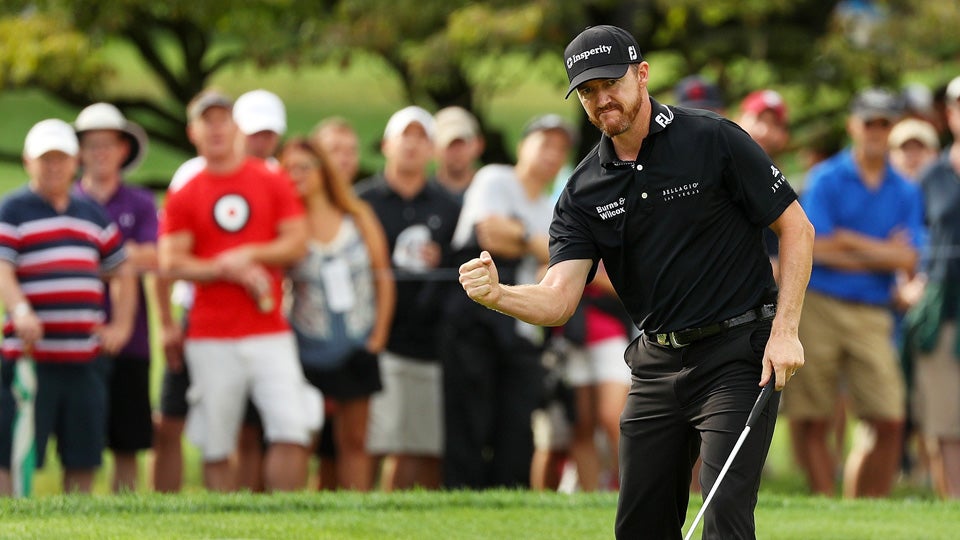 Jimmy Walker celebrates after sinking a birdie putt on the 11th hole during the final round of the PGA Championship on Sunday at Baltusrol Golf Club. Walker picked up his first major title.
Scott Halleran/PGA of America

SPRINGFIELD, N.J. — Years from now, when junior is a grandfather and drivers are made out of wood again, golf fans will look back at the list of winners of the PGA Championship and see the name Jimmy Walker right alongside some of the most sparkly names in the history of the game. Congratulations, Mr. Walker. You won yourself a major, the 2016 PGA Championship. Nobody can take that away from you. Winning at Napa or San Antonio or Honolulu, that’s a fine accomplishment. But it doesn’t make you part of the lore of the game. You, sir, are now part of the lore. Even if it might not feel like it just now.

Walker, a native Oklahoman who lives in Texas and carries himself with deep reserves of calm, had a remarkable four rounds on the par-70 Lower course at Baltusrol Golf Club: 65, 66, 68 and a rock-solid, bogey-free 67 in the finale, giving him a one-stroke victory over Jason Day, who won the PGA so memorably last year at Whistling Straits, on glimmering Lake Michigan. Walker didn’t do much wrong on Sunday, suggesting that he either has ice water flowing through his veins or that he treated this major championship as if he were playing in the National Mining Association Pete Dye Classic, an event he won on the Nationwide tour nine years ago.

It is not Walker’s fault, nor anybody else’s, that this rain- and heat-plagued 98th PGA Championship felt more like the old Sammy Davis Jr. Hartford stop at Wethersfield Country Club than the grand event it actually is. Baltusrol Golf Club is where Jack Nicklaus won the U.S. Open in 1967 and 1980 and Phil Mickelson won the 2005 PGA Championship. It’s a classic, hard golf course. But with intense heat on Thursday and Friday and soaking rains on Saturday and Sunday, the gents found themselves playing country-club golf, here in this affluent swath of the Garden State. Tee shots were plugging, approach shots were backing up, the greens were slow and, in the fourth round, lift, clean and place was in effect. Players were begging for off-line shots to settle in bunkers. Damp, heavy sand is a gift to the game’s best.

TOUR CONFIDENTIAL: Walker’s Major Win, the Big Three’s Major Bust, and the Player of the Year Is…

Walker, in fact, made his first birdie on Sunday when he holed a high, soft greenside trap shot on the par-4 10th. That was at 5:25, and it got him to 12 under. About a minute later, Day dropped a downhill bender on the par-4 11th to get to 11 under. Ten minutes or so after that, Walker answered with a birdie bomb at 11, to get to 13 under. Sounds electric, doesn’t it? It just wasn’t. The championship never had any rhythm. It was a slog.

For most of Sunday afternoon, or at least in the witching hours, you knew the winner was going to be Walker or Day, who neighbored next to each other in their elaborate motor homes in the Baltusrol parking lot. Not because Day and Walker were so far ahead of the rest of the field. They weren’t. But because they were playing in the last two groups, they had more holes to play than other contenders, notably the two par-5s that close out Baltusrol. And more holes meant more birdie opportunities. The U.S. Open at Oakmont this was not. Usually in a major, you want to get to the house as fast as you can. Here, more golf to play was all good.

This was particularly obvious as dusk set in, at a little past 7. Day had smashed his second shot on the 18th to about 10 feet. For a brief moment, the course and the event were enveloped by the fog of Sunday major pressure. He was looking at an eagle putt that would put him at 13 under. Walker was on the 17th green, eyeing an eight-foot birdie putt that would move him to 14 under. He heard the roar that welcomed Day’s shot to the home green, backed off, got over the ball again, and curled it in on the low side. Day made his putt, which meant that Walker needed a 5 at the last to win.

Walker drove it in play with a long iron, but he hit a leaky fairway wood for his second, his ball finishing half submerged in long, wet grass. “I hit it in the one place you could not hit it,” he said. The 33-yard pitch shot was uphill, over a bunker to a hole that was cut about five paces from the right edge of the green. Not easy. Not when you’re trying to win your first major. He hit a full, high open-faced lob wedge that left him with about 30 feet for a two-putt par and a one-shot victory. The putt to win was a three-footer, made in the semi-dark. Had he missed, there would have been a three-hole aggregate playoff that most likely would not have been completed until Monday morning. Day was watching greenside, with his son Dash. When Walker made it—his decisiveness over the putt to win was so impressive—he made a lot of people happy, just not those two.

It was an interesting and good finish, but somehow this championship lacked grandeur. The three U.S. majors were all a little off this year and not because each was one by a first-time major champion. Danny Willett of England was a deserving and likable regular-bloke winner at Augusta, but Jordan Spieth’s Sunday quadruple-bogey at 12 created more buzz than anything else. The U.S. Open will forever be remembered for the rules contretemps, even though Dustin Johnson’s play was absolutely superb down the stretch. The key to the PGA Championship: hit it in the fairway with a three-wood or a driving iron, stick it close with an short iron and jam home the putt. That’s not how Baltusrol played for Mickelson in ’05 or Nicklaus, but this week Baltusrol was not her regular self. She was all mushy.

You can be sure that for Walker and Day, the PGA didn’t feel like Hartford or Houston or Honda. Day was trying to become the second back-to-back winner of the PGA, joining Tiger Woods. Walker, the bearded amateur astronomy photographer and a five-time Tour winner, was looking to break through on golf’s big stage. Both were dressed in black, head to toe, except for the lettering of their various sponsorships. Black-and-white and read all over.

Because of Saturday’s torrential rain, some players, including Day and Walker, had to play 36 holes on Sunday, trudging through soggy grass that had to make their legs feel as if there were sandbags attached to them. But all the while, Walker looked so calm. When a reporter commented on that, Walker said, “I’m glad you guys think I looked calm, because that’s what I was going for.” Ernie Els speaks of this same sort of thing, faking a certain emotion on the chance that you can turn it into something real. That’s what Walker was able to do. With a beautiful, rhythmic swing that brings to mind Luke Donald’s move, Walker walked the fairways like a banker coming down the corridor to the boardroom.

Have you heard the one about the Swedish, Australian and American golfers who walk into a bar in downtown Warsaw together? The Swede, speaking perfect Polish, says, “A glass of your finest pilsner, please.” The Aussie says, “That sounds great—make it two, mate.” The American says, “I’m sick of being an anonymous golf professional with millions in the bank but no sparkle to my name whatsoever,” before leaving abruptly. Well, Jimmy Walker, your days of anonymity are over.

You won’t see him in Rio at the Olympics—the four Americans playing are Bubba Watson, Rickie Fowler, Patrick Reed and Matt Kuchar—but you will see him most prominently at the Ryder Cup at Hazeltine in late September. You won’t see Day at the Olympics either—he backed out, using the Z-word— and you won’t see him at the Ryder Cup (he’s an Aussie who lives in Ohio). But come 2017, you will most likely see him contending in majors again, if he can keep doing what he has been doing. In the last two years, he’s had five top-10 finishes in majors. In shooting 67 on Sunday, Day didn’t even play that well—not by his high standards—and yet he managed to keep his hand in the championship until its final shot.

TOUR CONFIDENTIAL: Walker’s Major Win, the Big Three’s Major Bust, and the Player of the Year Is…

Walker’s career is confounding, really, particularly given where the game is these days; the apprenticeship to elite play has never been shorter. Spieth (who played four rounds of par or better, but was never seriously in the mix) and Fowler (who finished three shots behind Spieth) and Rory McIlroy (who missed the cut) were all Tour-ready by age 20. Walker, who played collegiately at Baylor, turned pro at 22 but was not a fully exempt player on Tour until 10 years ago, at 27. Then, in his mid-30s, he won five Tour events in 18 months, one in 2013, two in ‘14, two in ‘15. Talk about your throwbacks. Tom Lehman got good in his 30s. Ben Hogan got great in his 30s. Walker has 2 1/2 years left as a thirtysomething golfer.

Walker’s caddie, Andy Sanders, played at Houston and turned pro the same year as Walker. He has been on Walker’s bag for all six of his Tour wins—and has MS. They are an impressive team, conferring on every shot without fuss. Walker is coached by Butch Harmon, the son of a PGA pro, who has taught other four other winners of the PGA Championship: Woods, Mickelson, Davis Love III and Jeff Sluman.

Phil is Phil and Tiger is Tiger—19 majors between them—but Sluman and Love can tell Walker something they know from experience, something Walker himself may find over time: Even if you only win one major championship, it changes your life. Love is the U.S. Ryder Cup captain this year, a job he also had in 2012. Without his win at the ’97 PGA, he most likely would never have been named captain. Sluman, winner of the 1988 PGA, has served as an assistant captain on Presidents Cup teams, his status elevated by that win. Walker will learn the same soon enough. Nobody will remember that the Sunday play was under lift, clean and place. What people will remember is the pitch on 18, the signs of gray emerging through his reddish beard and the cool he showed from start to finish on Sunday, a day of golf that last 12 hours and 36 holes and ended with the kind of heavy lifting every player dreams about, hoisting the Wanamaker Trophy.