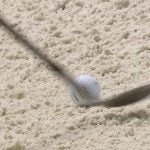 Abraham Ancer hits out of the bunker on Thursday on the 15th hole at Augusta National.

Abraham Ancer, sometime Thursday night, after his one-over 73 during the first round of the Masters, talked with his caddie, Benji Thompson. Ancer had been informed that he had been hit with a two-shot penalty after the round after a video review showed that he had, albeit inadvertently, brushed the sand before hitting out of the greenside bunker on the 15th hole at Augusta National. That 71 became a 73.

Thompson offered a word of encouragment.

“Got to make just two extra birdies is what I told him,” Thompson said on a video posted to the Caddie Network Instagram account on Friday morning. “So go out there today and try to have a good one. Try to get it past us. I don’t want to talk about it to him today. I don’t think he’ll be bringing it up. It is what it is, over and done with.

Ancer, the footage shows, positioned his club behind the ball, and as he started his swing, his club pushed back a tiny clump of sand. The shot failed to get out of the bunker; Ancer would hit another and finish with a bogey on the par-5.

It wasn’t until Ancer had signed his card and left the scoring area that the Rules committee reviewed video evidence “regarding a potential breach of Rule 12.2b(1), which states that touching sand in a bunker right behind the ball results in a penalty,” the tournament said in a statement.

“The touching of the sand was deemed visible to the naked eye. Had this not been the case, the video evidence would have been disregarded and a penalty would not have been applied.”

Thompson, on the Caddie Network video, said neither he nor Ancer saw the sand move.

“I didn’t see it standing there,” said Thompson, an Augusta native who started caddying at the Masters in 1998 at the age of 18. “He didn’t even know he did it — he was on a flat lie and the ball was on the upslope, so he was judging it the best he could. So minute error that he made.”

“I was just informed that I have been assessed a 2 stroke penalty for unintentionally grazing the sand in my backswing on hole 15,” he tweeted Thursday night. “While I’m gutted, I can’t wait to get after it tomorrow.”