Phil Mickelson has a ‘stock’ driver and a ‘NASTY’ driver, because of course 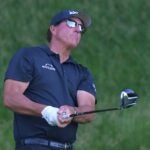 Phil Mickelson with driver in his hands can mean so, so many things.

We’ve learned a lot through the years from Phil Mickelson with a driver in hand, and this week is no different.

We’ve learned that sometimes two drivers is better than one. Phil did that at the 2006 Masters, which he won. We’ve learned you can have a mini driver and a normal driver. Phil did that at the 2021 PGA Championship, which he won. He’s ranted for years now about how nothing is more important than — say it with him — hitting bombs. Well, there’s a new Lefty-ism we can add to the long and ever-growing list this week, thanks to Harry Higgs and the Fore Play Podcast.

Higgs has become well-known as an engaging storyteller on the PGA Tour, and he lived up to it on the podcast. He detailed the infamous match where he paired up with Keith Mitchell to take on Mickelson and Joel Dahmen at Liberty National this year.

Playing with Phil, as Higgs notes, is quite the experience. You learn some things simply by keeping your ears engaged. Like when Phil asked his brother and caddie, Tim Mickelson, if he should hit a “stock” driver or if he should reach down deep in his bag and pull out the “nasty” driver.

What is a “nasty” driver? We can really only guess that the implication is something fierce.

“No one has ever said this on a golf course in a professional golf tournament in their lives,” Higgs said. “But that’s just Phil. And Tim — Tim goes ‘Stock is good here, Phil. We can get there with a good stock one.’

“Phil is like, ‘Okay, yeah.’ He goes through his routine, swings it and grunts. This is not stock. He audibly grunted as he struck the golf ball. That’s one of the nasty ones. And look, to Phil’s credit, it went nine miles, he flipped a long iron onto the green and he made birdie. I will never, ever forget that.”

I don’t think we will either. Mickelson later confirmed on Twitter what Higgs and we all thought: this was more than a stock swing.

Is Mickelson being totally serious with that caddie discussion? Only he would be able to answer that question. Mickelson does own one of the longer swings on the PGA Tour — meaning he can get after it when he really wants to — and over the years has maintained his ball speed while aging to keep up with the length of younger players on Tour. It’s actually rather impressive. His ball speed average in 2011: 175.37 mph. His ball speed in 2021: 175.22 mph.