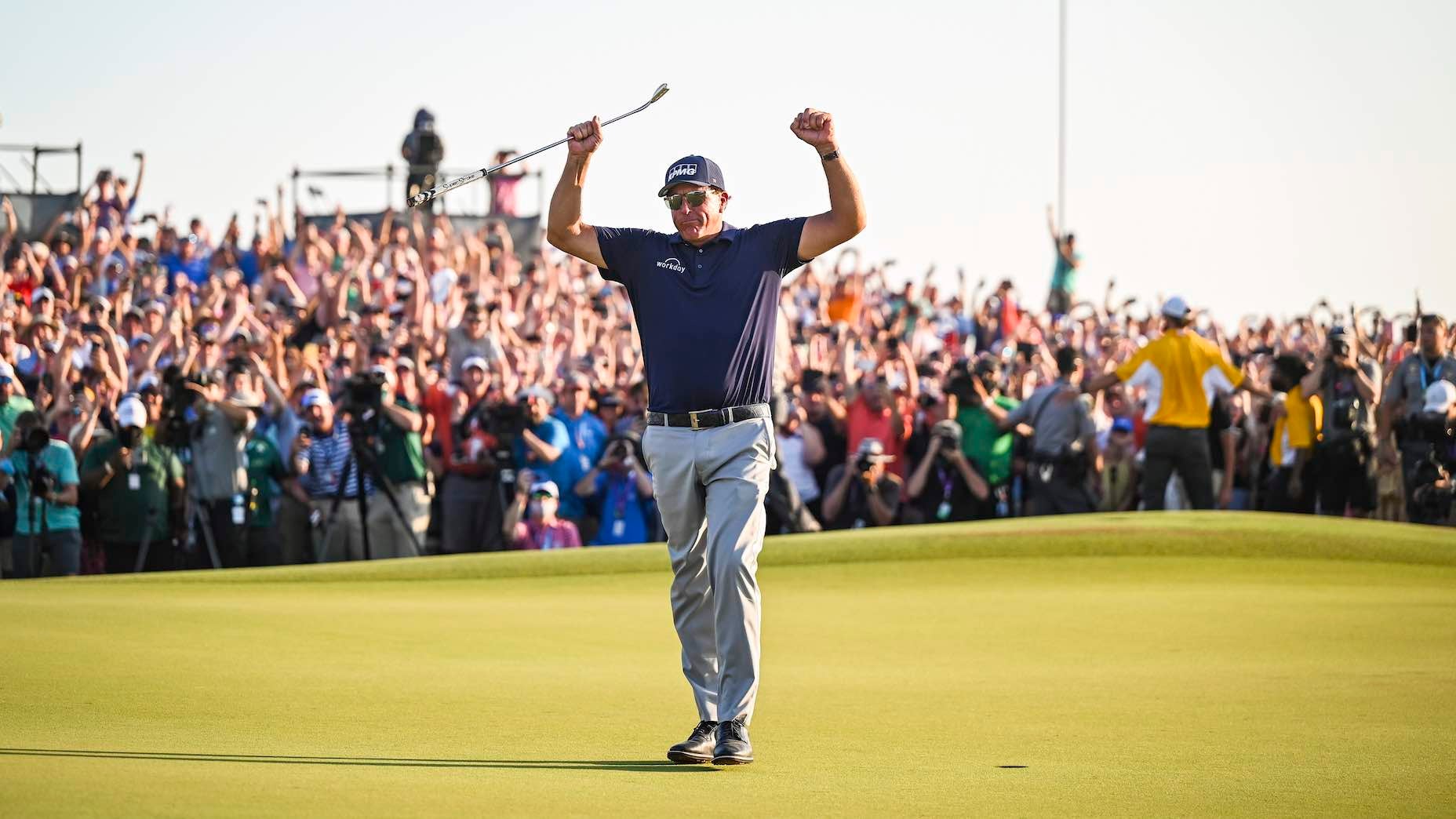 Phil Mickelson outlasted the rest of the field on an unforgettable Sunday at the PGA Championship.

KIAWAH ISLAND, S.C. — Golf’s security protocols, as it turns out, break down pretty quickly under duress.

Near the close of a sweltering South Carolina Sunday, a horde of energized Phil Mickelson fans turned the 103rd PGA Championship into absolute bedlam. They’d rushed the 18th fairway, overtaking Mickelson and his caddie, chanting and bracing for position. Quarters were tight and you could tell by the smell; a day’s worth of sweat and light beer wafted up from the assembled masses.

If you were near the front of the swarm, you could see Mickelson himself; he’d eventually beaten his way up to the green and was grinning on the fringe, flashing thumbs-ups and assessing his 16-foot birdie putt. The crowd — frenzied, crushed and euphoric — started to chant.

A uniformed officer appeared, pushing his way to the front. Ricky Elliott, Brooks Koepka’s caddie, was in the officer’s wake, and Koepka himself tucked in behind, like a tailback following his lead blocker. The second-place finisher at a major championship had been all but trampled en route to the 72nd green.

It was a thrilling, unsettling finish to an unforgettable day of golf, a day that ended up with a group coronation of a truly singular sporting figure. Two putts and one roar later, Phil Mickelson was the PGA champion at age 50.

This was a victory of the moment. For the first time in more than a year, thousands of fans congregated for a major championship. The vocal, enthusiastic, well-hydrated crowd had exuded pent-up energy all week long. It finally burst at the very end.

It was a victory of an era, too. Mickelson won his first PGA Tour event three decades ago and his career has been defined and redefined every few years since. Perhaps no golfer defies categorization more than Mickelson. That’s even more true now that he’s the oldest major champion in history.

“I’ve never been driven by exterior things,” he said Sunday evening. “I’ve always been intrinsically motivated because I love to compete, I love playing the game. I love having opportunities to play against the best at the highest level.”

Sometimes we forget that about Mickelson. Behind the business schemes, branding, dieting, philosophizing and smack-talk is a 50-year-old professional golfer who still really loves to play golf. There’s something pure in that.

Sunday also served as a reminder that if you ever find yourself watching golf and feeling the pull of an inevitable result, remember: You’re watching golf. Nothing is inevitable.

But through exactly one hole at Kiawah Island on Sunday, the result felt inevitable.

In one corner you had Mickelson, an aging warrior with exactly zero major top-10s since the Obama administration and a game that seemingly shouldn’t work at the Ocean Course. He grinded his way through an intense pre-round range session that included a broken club, a last-minute equipment switch and plenty of discussion with his swing coach Andrew Getson. (“If I hold this angle it’s harder, I have to flip it,” he told Getson as he worked to refine his driver swing, exactly 22 minutes before his tee time.) Mickelson missed the fairway, mis-hit his approach and left his lengthy putt so short he was still away.

And then there was his playing partner, Koepka, who has won four majors since the last time Mickelson contended. Koepka warmed up on the far end of the range, exuding nonchalant intensity. In contrast to Mickelson, he didn’t really consult anybody. He didn’t appear to be tweaking anything in his swing. Koepka has built a reputation as a major championship killer; he was one lousy Sunday away from entering this week as a three-time defending PGA champion. All he did during warm-ups was get his body — and his putter — ready to go. It seemed to work: Koepka busted 3-iron 280 yards down the first fairway, hit a wedge to 12 feet and dripped the right-to-left swinger in the center of the hole.

Mickelson’s lone advantage had been his one-stroke lead. Now even that was gone. The oddsmakers in Las Vegas, the CBS announcers and many of you at home were aligned: Koepka would put his blinders on and plow his way to victory. Mickelson would be relegated, once again, to runner-up.

It’s been many years and five major championships since “runner-up” defined Mickelson’s career. But his time on Tour has been riddled with near-misses, including 11 runner-up results at majors. Could he come this far to fall, once again, just shy of a defining victory?

But Koepka, with all the momentum in the world, served as a neat reminder that momentum doesn’t guarantee a perfectly square clubface at 120 miles per hour while an entire island of Michelob-fueled spectators screams for your playing partner. At No. 2, a downwind par-5, he tugged his tee shot, pulled a wedge, drew a gnarly lie and made double. Mickelson pulled off a nifty up-and-down from behind the green for birdie. Suddenly he was back in front by two.

Their duel went on like that for a while. Mickelson gave one shot back at the 3rd. He stole one at the par-3 5th with a highlight-reel holed bunker shot. Koepka gained two shots back at 6 after a blistered drive and stuffed iron. But Mickelson gained those two shots with another birdie-bogey flip at 7. The lead remained one.

It was only fitting that the moment Mickelson first put his stamp on Sunday’s win came while he was standing in the crowd.

He’d put two shots between himself and Koepka with a spectacular birdie at 10; Mickelson’s 3 and Koepka’s 5 ensured a three-shot lead with eight holes to play.

But the real crowning came at 11.

Mickelson’s tee shot sailed so far left he shouted “Fore!” before it reached his apex. The ball flew left of the fairway, left of the rough and into a sand dune, where an ecstatic group of onlookers soon congregated. Before this week, it had been more than a year since we’d seen Mickelson standing in this sort of U-shaped tunnel. It seemed like he’d re-entered his comfort zone.

Mickelson had been deadly serious all week, but as he approached the crowd he finally broke character.

“A lady picked your ball up,” one fan told him.

“Kick her off the Tour, Doug!” another chimed in. Several more chimed in, hoping for a laugh. Mickelson obliged, grinning as he called for a rules official. Then started gesturing toward the crowd gathered on the left.

“You guys are going to want to move way back,” he said. “The wind is going left to right and I’m gonna hit this thing very low. If I were you, I’d go, like, 10 more feet.”

After the official led Lefty through proper relief procedure (interrupted only by a series of one-liners), Mickelson sent a screaming punch shot down the fairway. Koepka made a surprising unforced error, laying up into a brutal position in the left waste area. He walked off with bogey. Mickelson escaped with par.

From there it was just a matter of staying upright. His lead grew to five, allowing him to leak bogeys at 13 and 14 and lay up a short birdie putt at 15. Another nifty up-and-down at 16 bought him some breathing room, and good thing: His tee shot at 17 found the heather long of the green, he hacked out and made another bogey.

All that was left was surviving the crowd.

Fifty. It’s a round number, and significant — it allows Mickelson to play the PGA Tour Champions and coast into the next phase of his career, if he wishes. Bear in mind that Mickelson is older than folks like Lance Armstrong, Mia Hamm and Pete Sampras. But his desire to win has spanned generations on Tour.

After the round, several generations of golfers were there to offer congratulations. Jon Rahm. Nick Faldo. So many others in between. Justin Thomas said he was in awe from home. So did Tiger Woods, Mickelson’s longtime foil. He called it “truly inspirational.”

If there’s anyone else in the game who knows what Mickelson felt on Sunday evening, it’s Woods. Big-picture, Woods knows what it’s like to wonder if you’ll ever win again — and then pull it off. He knows what it’s like to be stuck in a massive crowd on the 18th fairway, too: The entire scene recalled the mayhem from Woods’ Tour Championship victory in 2018, where he completed his comeback as East Lake turned into a madhouse.

“I’ve never had something like that,” Mickelson said. “It was a little bit unnerving but it was exceptionally awesome, too.”

The frenzied crowd dispersed, bit by bit. Players hung around. Rahm. Paul Casey. Rickie Fowler. Mickelson made the interview rounds, slowly getting over the rush of the moment. He insisted that he hadn’t allowed himself to get this far in his imagination all week long. Once he did get there, the emotion came pouring out.

“Certainly one of the moments I’ll cherish my entire life,” he said. “I don’t know how to describe the feeling of excitement and fulfillment and accomplishment to do something of this magnitude when very few people thought that I could.

“But the people that believed in me, my wife, Amy, Tim and [swing coach] Andrew Getson, those are the people that continued to inspire me to get the best out of myself.”

“He never doubted himself,” his brother (and caddie) Tim said after the round. “His will and desire to win now is as high as it’s ever been, in my opinion. Certainly it’s probably higher than when I started caddying for him.”

He added another detail, too: In the four-and-a-half years he’s been caddying for his brother, this was the first time he’d cried.