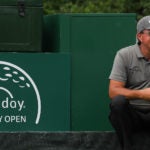 Phil Mickelson takes in the action on the 15th hole at the Workday Charity Open.

Phil Mickelson was stunned. He deeply exhaled, the air puffing out his cheeks. Mickelson had hit his tee shot in the water on the par-3 16th hole at Muirfield Village Golf Club, missed his bogey putt short and left and was walking toward finishing up his five. It would put him 4-over over his past five holes. It would put further down the leaderboard, all the more frustrating after he had shot a 4-under front nine during Thursday’s first round of the Workday Charity Open.

On his next swing, Mickelson was stunning.

He unleashed his drive on 17. His face this time showed no expression as he watched the ball sail while walking four steps forward to pick up his tee. It came to rest 394 yards away, tied for the fifth-longest drive the five-time major champion has hit on the PGA Tour since 2002, which is as far back as the Tour has recorded drives online. Even at 50, Mickelson can take our breath away.

“This was a good week in a lot of areas, and I’m very optimistic going forward,” Mickelson said after the final round of his last tournament, the Travelers Championship two weeks ago. “I don’t think this is a one-off. I think it’s going to be the start of something really special, at least that’s what I’m sensing. So I’m excited to work on it, to refine it and then to get back out in Ohio and see if I can put it together.”

He did on 17 on Thursday, on his way to a 1-over 73. For the player who likes to hit bombs, this was one of his biggest.

On Thursday, no one was within 35 yards of him. Jamie Lovemark was second-longest on the hole at 359 yards. The shortest drive on the hole was Nick Watney’s 257-yarder – 137 yards behind Mickelson.