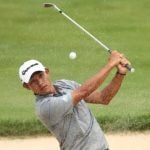 Collin Morikawa hits a shot out of a bunker on the 18th hole at Muirfield Village Golf Club on Thursday.

Collin Morikawa had made 22 straight cuts to start his PGA Tour career before it ended two weeks ago at the Travelers Championship. He’ll very likely be starting that streak again. And perhaps even a win streak. Here are three things you should know after the first round of the Workday Charity Open, the first of back-to-back events at Muirfield Village Golf Club in Dublin, Ohio.

Two weeks ago, Morikawa played just two rounds at a PGA Tour tournament for the first time since he turned professional last June, then sat out last week. He’s determined to play four rounds this week.

Morikawa had six birdies and an eagle to shoot a 7-under 64 to grab the first-round lead at the Workday Charity Open. He leads by one shot over Adam Hadwin and by two shots over Nick Taylor, Hideki Matsuyama, Zach Johnson and Aaron Wise.

Morikawa’s most impressive shot came on the par-5 5th. Drive down the left side of the fairway. A second shot, from 246 yards out, that flew water and landed within 4 feet. One putt. Eagle.

“I don’t want to miss cuts,” Morikawa said. “But the game, I learned a lot from those two days. I learned a lot last week. I learned a lot, kind of the prep Monday through Wednesday with my coach. So you kind of reset, get ready for this week, and every week is a new week, so you’ve just got to get ready, and the game felt good. So we’ve got three more days of the same thing.”

16 players are within three shots of the lead

Morikawa’s bogey on the 18th tightened up the top of the leaderboard.

One shot behind is Hadwin, who bogeyed his first hole, the 10th at Muirfield, then recorded seven birdies for a 6-under 66. Two shots behind are Taylor, who did not make a bogey; Matsuyama, who overcame a double bogey on the 13th; and Johnson and Wise, who each had six birdies.

The group at 4-under includes Justin Thomas and Patrick Reed. In all, 16 players are within three shots of the lead.

Brooks Koepka far off the lead

Brooks Koepka, who withdrew from the Travelers Championship two weeks ago after his caddie tested positive for the coronavirus and did not play last week, shot a 2-over 72. The rust showed early.

Starting on the back nine, Koepka bogeyed the 11th, 15th and 17th and double-bogeyed the 18th for a first-nine score of 5-over 41. He rebounded on his second nine with three birdies and no bogeys.

Joining Koepka at 2-over was Justin Rose, and Bubba Watson shot a 7-over 79.