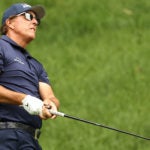 Phil Mickelson holds the lead after two rounds of the Travelers Championship.

Phil Mickelson’s iron tee shot on the par-4 17th at TPC River Highlands sliced left. It took a big bounce off a cart path and rolled a few yards before eventually settling on asphalt that was touching the bottom of a ground-under-repair grass embankment. Over his 44 victories on the PGA Tour, his 28 years as a professional and his now 50 years on earth, this one seemed new to him.

What’s new is also old for Mickelson. He’s escaped different danger throughout the 44, 28 and 50. Mickelson did so again Friday, and because he did, he’s the midway leader at the Travelers Championship.

As the ball sat, it was a near impossible shot. He called for a rules official. Mickelson initially wanted to take a drop on the cart path itself and avoid anywhere near the ground under repair, which on an incline and with deep rough, also would have been near impossible.

The rules helped give Mickelson a possible shot.

The cart path, the rules official clarified, was also considered ground under repair. Mickelson’s nearest relief was actually to the right of the path. On somewhat even grass. With a better view of the green. Mickelson even got to place his ball after his two drops rolled onto the path.

“OK cool,” Mickelson told the official. “All right, that answers my – I did not know that, so thank you.”

The official drove away, Mickelson hit his second shot within 41 feet of the pin, and he two-putted for par. He birdied 18 for a 7-under 63 and a one-shot lead.

“That’s what I was trying to do with the ground under repair, but they considered it all part of the path, so if I had to go left up on that hillside, I would have played it off the path, but on the other side, I had a level lie, a reasonable area to drop it, and I felt that was a better option than playing off the path, so I did that.”