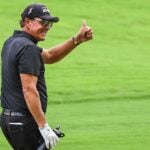 In a field full of stars, the CJ Cup leaderboard does have one noticeable omission: Phil Mickelson.

The field at this week’s CJ Cup is stacked. From savvy veterans like Brooks Koepka and Rory McIlroy to budding stars like Matthew Wolff and Sungjae Im, the leaderboard in Las Vegas is among the strongest of the year. However, there is one notable omission in an otherwise star-studded field — Phil Mickelson.

Instead of duking it out at Shadow Creek this weekend, Mickelson is competing on the Champions Tour at the Dominion Energy Charity Classic. This can partially be attributed to the fact that he was not exempt into the limited-field CJ Cup. But with players of lesser names being granted sponsor’s exemptions for the week, if he’d wanted to play it’s almost certain he would’ve gotten into the field.

When prodded on why he hadn’t gone the sponsor’s exemption route, Mickelson was straight to the point.

“I felt like it would be better for me to play here,” he said. “I think last time I played at Shadow Creek, even if I beat all 78 guys, it would still be a letdown. I made so much more last time I played, that I just didn’t see the benefit … Sorry.”

Mickelson is, of course, referencing his Thanksgiving match in 2018 against Tiger Woods in which he took home a cool $9 million (which was given to charity). The winner’s cut at the CJ Cup this week is only $1.7 million, so even if he were to best one of the strongest fields of the year, he’d still walk away from Vegas with far less than last time.

Sometimes you’ve got to know when to walk away from the table — especially in Vegas.