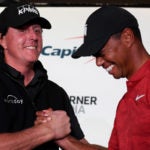 Phil Mickelson and Tiger Woods square off in The Match 2.0 later this month.

Several years ago, it might have seemed unlikely for Phil Mickelson and Tiger Woods to team up for a one-off event outside of the PGA Tour. But now we are just a couple of weeks away from the second one in the last two years.

Mickelson joined The Dan Patrick Show on Monday to discuss the new golf club he’s joining, “The Match: Champions for Charity” and more. The latter will see Mickelson and Tom Brady team up versus Woods and Peyton Manning on May 24 at Medalist Golf Club in Florida.

But the event, in which a total of $10 million will be donated to COVID-19 relief via WarnerMedia and the four golfers, wouldn’t happen without stars like Woods and Mickelson driving it. Patrick asked Mickelson when he thought his relationship changed with Woods.

“So I’ve always appreciated and respected what he has done for the game of golf and what he’s done for me, because when he increased the ratings, nobody benefited more than I did on the course and off the course,” Mickelson said.

Mickelson referenced his first professional win, the 1991 Northern Telecom Open, in which the entire purse was $1 million. (Mickelson won as a 20-year-old amateur, so he couldn’t accept the first-place check of $180,000.)

“As I was starting my career I thought and wondered if there would ever be a point where we would have a first-place check of a million dollars,” he continued. “Because all of these other athletes were signing these big contracts and I did not think it would happen in my career, and Tiger comes along, gets golf on the front page, and next thing you know sponsors want in. And we’re playing for a million-plus first-place check every single week now and it’s been like that for quite some time, and I have always attributed that to him, as well as the increased opportunities off the golf course he has provided.

“So I’ve always had this respect for what he’s done for me and my family because nobody has benefited more, but I think our relationship turned around in 2016 when we worked together for the Ryder Cup. He was an assistant captain, and we ended up spending a lot of time on the phone getting ready, talking about players, picks, statistics, alternate shot, course setup and all these things. And getting an idea to see how prepared he was and how meticulous with each little thing, I had a new respect for him. But when we worked together for a common goal, which was to win the Ryder Cup, it brought us closer. I think that was kind of the turning point.”

“The Match: Champions for Charity” begins at 3 p.m. ET on May 24 with Turner simulcasting the action across TNT, TBS, truTV and HLN. It will be the second of two charity golf matches broadcast on TV in back-to-back weeks. The first is this Sunday, May 17, in which Dustin Johnson, Rickie Fowler, Rory McIlroy and Matthew Wolff compete in the “TaylorMade Driving Relief” skins game. That begins at 2 p.m. ET on NBC.